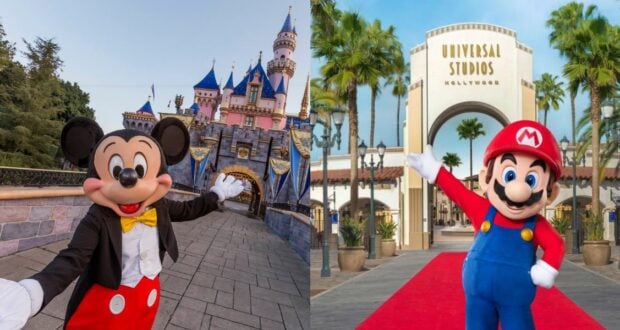 The unending battle of two theme park giants is swarming social media. With Universal’s most recent reveal, Disney and Universal fans are reminded how much better Disney is at Imagineering.

While Walt Disney World was proud to finally announce an opening date for TRON Lightcycle / Run, which took 5 years to construct at Magic Kingdom, Universal hit back with the announcement of a new Texas-based Park, as well as a Las Vegas, Nevada location that will be inspired by Universal’s popular Halloween Horror Nights.

Additionally, Universal is welcoming media for coverage of its brand new land at Universal Studios Hollywood in Los Angeles County, California, called Super Nintendo World, which opens to the public on February 17, 2023.

But, just when you start to cheer for Universal’s intense project growth, it seems like the new Super Nintendo World Hollywood was constructed with little effort to keep the outside world… well, outside.

Instead, reports and photos are flooding social media that Universal’s Super Nintendo World flopped on its sightline construction for the Super Mario world.

@Universal_Core took to Twitter to share several photos, along with “Sight line issues at Nintendo World Hollywood. What do you guys think?”

Walt Disney himself said it best… “I don’t want the public to see the world they live in while they’re in the Park (Disneyland). I want to feel they’re in another world.”

The Walt Disney Imagineers have worked to live up to Walt’s idea of providing Guests with a feeling that they have entered into “another world” with each theme park created. With carefully calculated sightlines, it’s rare to see beyond the theme park bubble from within one of Disney’s Parks.

Sightlines are important enough to Disney Imagineers that it’s not uncommon to see sight test balloons floating over future construction zones around the Disney Parks and Resorts as Imagineers check sight lines to play a major role in moving forward with construction.

Of course, while it looks like Universal swung and missed on its sightlines for the Super Nintendo land, reviews of its new attraction, Mario Kart: Bowser’s Challenge, where Guests battle Team Bowser, are excellent, with the exception of only small-waisted Park Guests being able to enjoy the experience.

Additionally, the new mushroom kingdom features fun decor, such as a Piranha Plant, along with a Toadstool Cafe for dining and merchandise options.

If the Universal creative team is looking to compete with Disney’s themed lands, it’s going to want to take a chapter out of Mr. Walter Elias Disney’s book on how to do it and do it well for its future Universal Parks and lands.