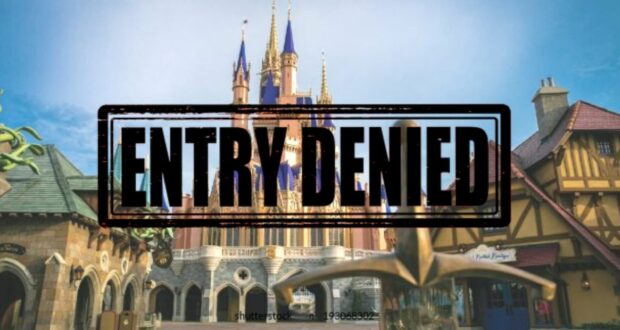 After Debate Heats Up Over Appropriate Attire, Woman Claims She Was Kicked Out of Disney Over Tank Top

Over the past week, a debate has ignited over what types of clothing should and should not be allowed in a Disney Park. It all began when one post about a couple who wore shirts in the Parks that many deemed inappropriate — the woman’s shirt read “I Wanted The D” and the man’s shirt read “I Gave Her The D” — went viral on social media. While some considered it an adult joke that kids would not understand anyway, many called for Disney to step up and not allow those types of shirts in the Parks. 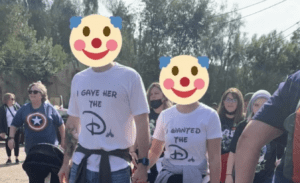 It appears that Disney and its Cast Members may have become aware of how many Guests were bothered by clothing like that, and they are now being a little bit more strict about their clothing requirements. Another image was shared on Twitter with a woman claiming that she was kicked out of a Disney World Park after wearing a tank top very similar to the one that caused the online uproar. The woman claims that she has worn the top to Disney Parks before, without incident, but this past trip was different.

“So after wearing this shirt for over 2 years during our Dinsey World trips, today my husband and I got kicked out!

This is ridiculous. If your child understands the joke, then it’s your parenting that should be judged, not my shirt.

People are too sensitive!”

Disney has always reserved the right to deny Guests entry into the Parks — or ask them to leave — if they deem what they are wearing as inappropriate. Disney’s dress code reads: In the past, Disney has allowed some Guests to receive a shirt from one of Disney’s many gift shops free of charge to wear around the Parks instead of the inappropriate shirt. However, some social media posts have encouraged visitors to wear unacceptable shirts on purpose as a way to get free clothes, so it looks like Disney may be cutting back on the free clothing and simply telling Guests they can’t come in.

Do you think shirts like this should be allowed at Disney Parks?