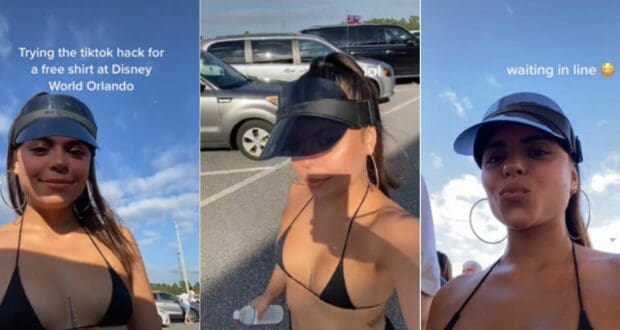 Right around the time of Walt Disney World’s 50th Anniversary in October 2021, a Disney Guest was escorted to a gift shop within the Park to receive a free shirt. Her outfit was too revealing and deemed inappropriate for the Disney’s Park dress code.

RELATED: Guest is Escorted Away by Cast Member for Wearing ‘Inappropriate’ Top into Parks

The Disney fandom may remember the uproar it caused that Disney would pay for a shirt rather than ask the Guest to leave or purchase their own shirt. The “Disney free shirt hack” went viral, with all sorts of people attempting to receive a free Disney shirt.

Well, thankfully, Disney caught on fairly quickly. Instead of Disney giving out free shirts to those with revealing tops, they asked the Guest to purchase their own shirt or leave the Park.

RELATED: Guest Complains That Disney Made Her Buy “Ugly” Shirt When She Was Dress Coded

And while we figured everyone has caught on to Disney’s dress code by now, one Park Guest decided to attempt the “free shirt hack” while recently visiting Walt Disney World Resort.

@heleniofficial took to social media to share a TikTok video stating, “Trying the tiktok hack for a free shirt at Disney World Orlando.” Check out the video below:

As you can see in the video, which now has over 6 million views, the TikTok user was stopped at EPCOT, and as noted, Disney “Tried to force us to buy one. Debunked!”

Disney’s dress code clearly states, “Proper attire, including shoes and shirts, must be worn at all times. The parks are a casual, family-oriented environment. Ensuring that the parks are family-friendly is an important part of the Disney experience. In that spirit, we ask you to use your discretion and common sense. Disney reserves the right to deny admission to or remove any person wearing attire that is considered inappropriate or attire that could detract from the experience of other Guests.”

Also included in the dress code is “Clothing which, by nature, exposes excessive portions of the skin that may be viewed as inappropriate for a family environment.”

We’re glad to know a year later, Disney is still holding its ground and not giving in to the “free shirt hack” for all those seeking a family environment on a Disney vacation.

2022-10-27
Jamie Sylvester
Previous: A Fan-Favorite Disney Experience is Ending, Unless Fans are Willing to Pay 38% More for the Same Experience
Next: Watch Disney’s Controversial ‘Song of the South’ With this Service