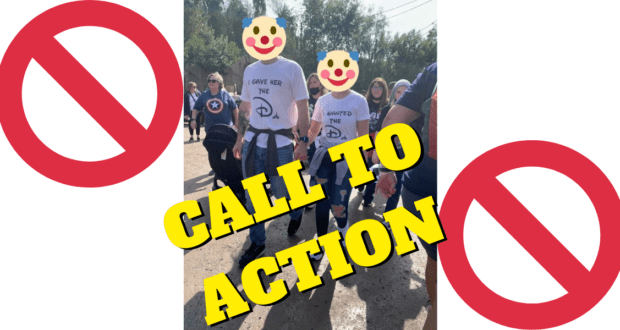 Guests Call for Ban of Shirts With Bad Taste

Recently, a picture of a couple wearing shirts with a dirty message on them at a Walt Disney Resort Park has gone viral. Guests and fans alike have expressed their distaste on social media platforms across the internet and have now called for real action to be taken going forward.

The pair of shirts in question are pictured below and read “I Gave Her the D” and “I Wanted the D”, a definite adult’s only joke. 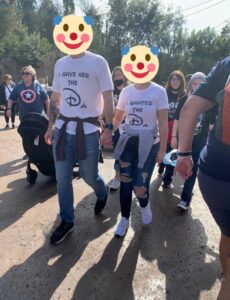 In an article by The New York Post, it is reported that Disney fans are calling for Disney to prevent further inappropriate behavior.

Angry Disney fans are calling for the Mouse House to ban inappropriate garb after a couple was photographed wearing sexually suggestive T-shirts at Disney World.

Custom shirts are popular among Guests at Disney and are a fun way to express creativity. Most, if not all, custom shirts made for Disney Parks contain fun, appropriate language that sometimes include jokes in a light-hearted manner. What we have seen in this case however, was the privilege of being able to wear these types of shirts being taken advantage of. Some tweets by angered Disney fans are shared below.

D is for Don’t

D is for Don’t pic.twitter.com/XnWGDAxTql

Inmcnico describes that he is tired of these types of shirts, replying to Sam Carter’s tweet with:

I’ve seen waaaaay too many of these

I’ve seen waaaaay too many of these

It is surprising that this couple gained access to the park with a message this dirty written across their bodies. Walt Disney World is extremely family-friendly and tries to keep a modest value to dress codes and guest morale.

“We reserve the right to deny admission to or remove any person wearing attire that we consider inappropriate or attire that could detract from the experience of other Guests,”

Hopefully the message by fans gets across to Disney and appropriate changes are made with regard to what language guests can use on their shirts.

What are your thoughts on the shirts this couple wore to the parks? Should custom shirts have more strict guidelines going forward?