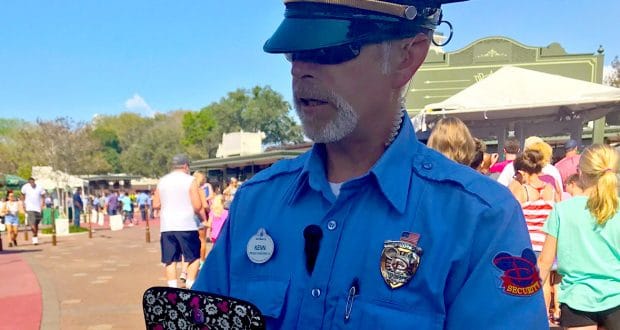 Walt Disney World. It’s the Most Magical Place on Earth—one where dreams come true, childhood fantasy comes alive, and no matter how old you are, you become a child all over again. So why would anyone visit the parks and display less than appropriate behavior? We’re not sure either, but just in case you ever get the urge to walk on the wild side while at Disney World, know that there are certain Guest (mis)behaviors that can land you in big trouble. Here are 10 of them.

You haven’t ridden the Seven Dwarfs Mine Train in a couple of years. You’re stuck in a 75-minutes-long stand-by line, and it’s 95 degrees outside with a humidity of 33%. The family in front of you consists of a Mom, a fed-up Dad, an out-of-sorts six-year-old and twin babies who have decided that this is the moment in time that they must be fed. How the heck are you going to last in this heat? At this rate, you’ll melt before you ever reach the loading zone. You’re not sure why—maybe it’s the heat, maybe it’s that you’re tired, or maybe it’s that your “hangry”—you get the overwhelming urge to step out of the line and wave to a family much further up in the line (this way no one will suspect anything). You race to join your pretend friends/family in the line. Whew! That’s better! No screaming little ones, and you’re finally in the shade. This is the life! But suddenly, you realize you’ve created a conundrum, and about 300 feet away, you see a Cast Member approaching. Friend, you have just jumped the queue (also known as line-cutting), and that’s a big no-no at Disney World.

You’re walking to the window inside Cosmic Ray’s at Magic Kingdom to pick up your mobile order, and you notice a man just ahead of you. Apparently, this just isn’t his day. You’re not sure what’s going on, but from the tone of his voice and the language he’s using, it’s obvious that he’s not happy at all. In fact, he’s fairly enraged, which is why you don’t envy the Cast Member approaching to diffuse the situation. You proceed to the window to pick up your food, and on your way to a table, you notice the man walking out with the Cast Member. Disney World is a big place, but there’s simply no room for offensive language and profanity. Using that kind of talk at the parks where others can hear you is against the resort’s policy.

You’re standing six feet apart from the people in front of you as you wait for your turn to go through security at the Transportation and Ticket Center. There are a couple of families in front of you. You’ve been to the parks before, and even on a well-attended day, security lines usually move faster than this. Soon the people in front of you start talking quietly; they’re thinking the same thing you are. But one of them got a glimpse of what’s taking so long—a non-compliant Guest with an appropriate license for the previously-concealed handgun he has with him. Disney Parks rules explicitly state that firearms of any kind are not allowed in the parks. Neither are toy guns or other objects that look like weapons. The security guard has tried to explain this to the gentleman, but he refuses to surrender the weapon because he feels his license means he can have it at Magic Kingdom too. Soon you notice two police officers heading toward the guard. Sadly, the gentleman didn’t comply and had to be removed from the park.

You live in Florida, and your best friend’s daughter is having a celebratory dinner at Biergarten at Epcot. She is a Disney fanatic, and you’ve got the perfect gift to give to her at the restaurant. And it’s wrapped so beautifully too! As you approach bag check at Epcot, the security guard takes your handbag to examine the contents and then informs you that he will have to unwrap the gift you’ve brought for your friend’s daughter. And wouldn’t you know, it’s not wrapped in a gift bag with tissue. Instead, it is meticulously and perfectly wrapped in wrapping paper and adorned with matching ribbons and bows. You vow never to bring a wrapped gift to the parks again—you’ll just hide outside Biergarten and wrap the gift there on one of the benches. Good call.

You’re in line for Peter Pan’s Flight in the middle of June in a non-COVID year, which means the queue winds all the way down the pathway, almost to Memento Mori in Liberty Square. And you notice some commotion back behind you. What started out as something that seemed absolutely magical and thoughtful ends up having a Guest removed from the parks. Her crime? She used to be a Cast Member and had taken her badge with her. She was wearing her badge and offering Magic Moments to Guests prohibited.

5. Being too loud at the resort hotels.

You’ve been waiting all year for this trip, and you’re staying at the Caribbean Beach Resort on Disney property. It’s your favorite resort hotel, and you’ve even brought along some friends to enjoy the parks with you. That evening, you and your pals begin reminiscing about high school and college—there were some pretty funny things that you remember, and everyone is laughing hysterically! Right in the middle of your conversation, there’s a knock at your door. It’s a Cast Member from the front desk who says they’ve received complaints about how loud you and your friends are being. You look at your watch; it’s 1:00 a.m., and suddenly you remember what you read on Disney’s website: quiet hours at the resort hotels are from 11:00 p.m. to 7:00 p.m.

It’s election season, and what better place to try to sway a few voters to vote for your candidate? There’s no shortage of Guests walking past you, and you don’t even have to say too much; you’ve made flyers that tell all about your candidate and why he or she is the best for the job. There’s one problem. Doing so is against Disney’s policies and procedures. In fact, distributing any kind of printed materials without obtaining the proper permission is prohibited. Here comes the coordinator and one of the ride attendants. You know what you have to do. Surrender the materials, cease distributing them or be expelled from the park. You decide the candidate isn’t worth you being removed from the park. Another good call.

3. Bringing alcohol into or out of the parks.

You finally made it to Epcot’s International Food and Wine Festival! It’s the only one of the park’s annual festivals that you hadn’t experienced. You love the music played by the Jammitors and Mariachi Band at the America Gardens amphitheater. You love the food from the different booths, especially the Chirashi Sushi Flower Pot you had at the food both near the Japan pavilion. Who wouldn’t? It salmon and sticky rice in an actual flower pot! But perhaps your favorite thing at the festival is the Aulan’i Sunrise drink at the Hawaii booth. So you had one when you first got to the festival, and you’re having another one now before you head home. You’re walking along your merry way, sipping your Sunrise, and you’re so happy with your drink that you don’t realize you’ve already walked past the entry gates when a Cast Member stops you and asks you if you’re drinking alcohol. You think to yourself, “if Vodka and Grenadine qualify as alcohol, then yes.” You don’t even try to conceal the drink’s alcoholic content so the Cast Member asks you to please dispose of the drink now—before heading to your car. Bye, bye Sunrise. There’s always next year, right?

You and the friends who are staying at the Caribbean Beach Resort are enjoying Hollywood Studios. While in line for Mickey and Minnie’s Runaway Railway, you decide it’s a great time for a group selfie—good friends are here, the Chinese Theater is in the background—what could be more perfect? And everyone knows that a good group selfie is hard to come by, so you pull out your trusty selfie stick and start to take photos. Here comes the Cast Member. Now come on, you knew better—selfie sticks have been banned at Disney for a few years now.

1. Possession of any of the prohibited items listed on Disney World’s website.

Yea! You’re headed to Animal Kingdom today! Now all that stands between you and the park is bag check. You beep when you walk through the scanners. So, you put your backpack on the table for the security guard who asks you to unzip it and show him the contents. What he finds shocks him. In the big pocket of your backpack, you have fireworks (Black Cats), pepper spray and a bottle of wine. In one of the smaller pockets, you have your pocket knife, two glass bottles of Coca-Cola, a tripod and a water gun. And in yet another pocket, you have a whistle, a small air horn and the Pocahontas costume you plan to change into once you’re in the parks. This security guard is not happy. Out of nowhere appears an army of Cast Members that are headed toward you and then, suddenly, you wake up and realize you were dreaming. But each of the items in the backpack in your dream is prohibited and having them at Disney World will crush your dream of spending the day at the Most Magical Place on Earth. Better leave that potpourri of items at home.