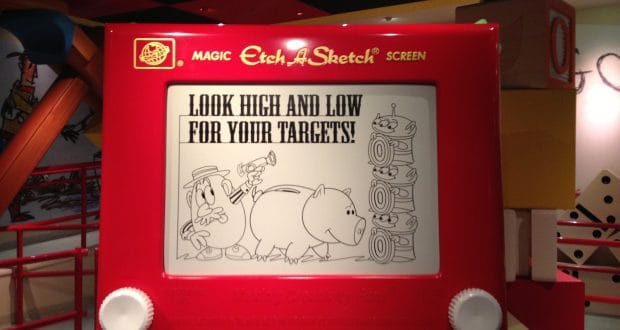 Disney’s Hollywood Studios is a favorite park of many guests thanks to its incredible past, present, and what’s to come attractions! Many attractions in the park feature big thrills and classic moments, and there is one attraction in particular that is a favorite of many guests. Toy Story Mania can be found in the Pixar Place section of Disney’s Hollywood Studios and magically shrinks guests down to the size of toys to immerse them in the Toy Story universe. The attraction has guests don 3D glasses to compete in a series of exciting and competitive midway games to see who can score the most points and earn bragging rights. With its whimsical theme and entertaining mini games, guests absolutely love Toy Story Mania. While guests might visit the attraction often and think that they know all there is to know, they might be surprised to learn that there are many secrets and facts found throughout the experience. From Hidden Mickeys and Pixar references, to historical dates and special painting techniques, there are plenty of facts and secrets for guests to find on Toy Story Mania in Disney’s Hollywood Studios!

The queue of Toy Story Mania is one of the most fun and inventive ones in all of Walt Disney World. Since guests have magically shrunken down, everything now seems larger than life. Guests are supposed to be in Andy’s room, and they soon find themselves surrounded by massive scale versions of classic toys and games like Lincoln Logs and Chutes and Ladders. Those who look around closely will notice that crayons have cleverly been used as architectural supports throughout the queue. While many of the crayons appear used, guests might realize that Andy, being a typical boy, seems to have never used his pink crayon which still has a sharp point.

Near the far end of the room that features the first portion of the queue, there is a mural that features massive magnetic representations of Toy Story characters. While this wall might look as though it has always been there, it is actually covering up what used to be a stage featuring Mr. Potato Head. The character was playing the role of the carnival barker and was decked out with a straw hat. The audio-animatronic Mr. Potato Head was one of the most advanced models that Walt Disney World has ever featured as he directly interacted with guests and even removed and reattached his own ear! Sadly, Mr. Potato Head can no longer be seen in the queue, but guests can think of him as they pass by the mural found there today.

When entering into the loading area of Toy Story Mania, guests truly feel as though they are in Andy’s room and can spot the huge box featuring the midway games that they are about to partake in. After boarding their attraction vehicles and donning their 3D glasses, guests take off for the entrance of the attraction and briefly pause in front of that large box. Found on one of the bottom corners is a barcode featuring what appears to be a random string of numbers. The numbers are 121506 which reference December 15, 2006, the date that Toy Story Mania was officially announced.

Once guests are on board their attraction vehicles, they soon find themselves immersed in the midway games and competing in a series of five mini games and a bonus round. Each mini game is hosted by different Toy Story characters and features a different target to aim at. While guests can certainly score a lot of points shooting at normal targets, each mini game features an Easter Egg which triggers a special target or scenario to pop up allowing guests to score even more. Each Easter Egg can generally be triggered by hitting a specific series of targets and can leave guests with huge scores to brag about!

While moving from midway game to midway game, the attraction vehicles whirl around brightly painted props and game pieces. The trick to everything in Toy Story Mania looking so vibrant was that the Imagineers who were in charge of painting wore 3D glasses while working to help everything look as perfect as possible to guests enjoying the attraction!

While the most popular characters from Toy Story host the mini games, other recognizable faces can be found throughout the attraction in scenes between each mini game. A great character to look out for is Rocky Gibraltar, the incredibly strong figure, who can be found in his own (hand stretched) taffy cart between mini games!

After checking out their scores and disembarking, guests deposit their 3D glasses in bins and make their way towards the exit of Toy Story Mania. Just before turning at the end of the disembarking area, there is a large Little Golden Book titled Tin Toy and written by Lasseter. This references John Lasseter, the chief creative officer at Pixar, who originally conceptualized a story called Tin Toy in which the main character came to life. Lasseter later used his inspiration from the Tin Toy book to come up with the original idea for Toy Story!

2016-07-31
Caitlin Kane
Previous: 10 Insider Tips For Getting The Most Out Of Rides At Walt Disney World
Next: 6 Gems To Know When Staying At Disney’s Polynesian Villas & Bungalows