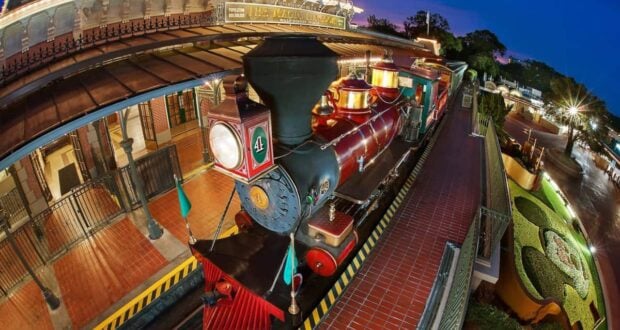 Big news is coming out of Walt Disney World Resort! We’re thrilled to learn the news that after years of closure, the beloved Walt Disney World Railroad at Magic Kingdom Park is opening today, December 22, 2022, for select Guests.

The Walt Disney World Railroad was placed into a “temporarily closed” status four years ago in December 2018. The nostalgic attraction was closed to make way for the new highly-anticipated Tomorrowland attraction, TRON Lightcylce / Run.

With the TRON coaster’s construction crawling in speed, Disney fans have been eager to see the Walt Disney World Railroad return to its normal operation, circling the Magic Kingdom Park. We were, however, hopeful when a recent video captured the train rolling through its new TRON tunnel.

Disney teased the railroad’s return, but now we have more concrete details that have us eager to finally catch a ride on the beloved steam engine!

@ScottGustin took to social media to share, “NEW: The Walt Disney Railroad will reopen “this holiday season” and will feature “a completely refreshed track looping the park” and “an all-new voice to bring guests into the beloved stories they encounter as they travel from one magical land to the next,” Disney confirms.”

Additionally, Disney has announced, “We are delighted to share Walt Disney’s love of trains with the world once again, taking guests for the iconic grand circle tour of Magic Kingdom this holiday season.”

Not only will ALL Disney Park Guests visiting Magic Kingdom Park be able to finally ride the Walt Disney World Railroad in the very near future, but Disney has opened the attraction for select Guests, its beloved Cast Members, for special previews starting today, December 22, 2022.

“All Aboard! Listen to the clamor of the engine, the chug of the wheels and the call of the whistle as you travel aboard the Walt Disney World Railroad. Take your seat on 1 of 4 meticulously restored, vintage narrow-gauge steam trains—originally built between 1916 and 1928—and enjoy a relaxing 20-minute, 1.5-mile scenic round-trip tour.”

“It’s a convenient—and nostalgic—way to get around Magic Kingdom park! Find a Station: You can board or disembark at any of 3 stations: Near the entrance to the park on Main Street, U.S.A., The Frontierland station, and The Fantasyland station.”

With the opening noted for this “holiday season,” this means we are likely days away from the train opening to ALL Disney Park Guests. Until then, we hope the select Cast Members are able to ride enjoy the tour of Magic Kingdom!