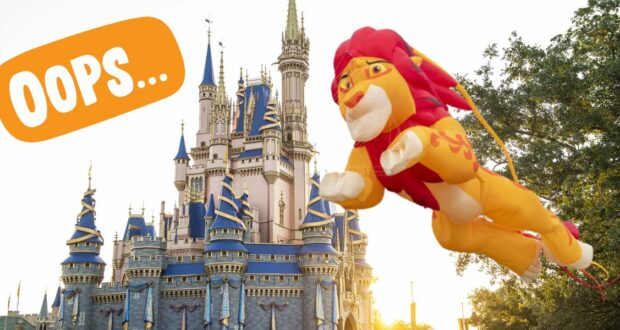 We are not perfect. Chances are, if you scroll through this article, you will find a handful of errors despite proofing. But, when you’re the Walt Disney Company… well, mistakes are quickly spotted and shared for all to see. And, in this case, someone from Walt Disney World advertising seemingly forgot that Disney KiteTails was canceled.

Mistakes happen, but Disney seems to be on a roll with hiccups. Just recently, Disney released a Mr. Toad’s Wild Ride photo opportunity with the Disney PhotoPass. The image released to show off the photo op was done with such poor photoshop Disney later pulled it down as fans tore the post apart. Check it out in the video below:

We’ve seen incidents such as a Walt Disney World executive leaking the opening weekend for EPCOT’s Guardians of the Galaxy: Cosmic Rewind roller coaster, then trying to delete the post before others saw the accidental release.

We’ve even seen misspellings on big renovations, such as when Disney removed its Boardwalk Inn Resort clown slide, only for fans to point out that the new slide featuring Mickey Mouse and his pals had a typo.

Or, do you remember the time Walt Disney World had its Guests SUPER excited that it was releasing Annual Pass ticket for purchase again… but quickly took down the offer once they realized the mistake? That was a painful day!

We can remember the day MagicBand+ hit the shelves by accident, and Disney quickly attempted to retrieve the purchased bands that weren’t ready for distribution.

Most recently, Walt Disney World announced breaking news as it would close several experiences due to the arrival of the potential Hurricane Nicole. Just hours after the news was reported on several networks, Disney decided to reverse its decision quietly.

Nope, not even Walt Disney World is flawless.

Now it seems like the latest issue has hit while attempting to advertise a Disney vacation. While scrolling Facebook on November 7, 2022, we spotted a Walt Disney World-sponsored ad populating our feed. It’s an easy one to spot, as it features a photo of the canceled Disney KiteTails entertainment from Disney’s Animal Kingdom Park:

Sadly, Disney KiteTails reached the chopping block as the outdoor show featured colorful kites, such as character kites from The Lion King and The Jungle Book, which flew through the sky while being pulled by jetskis.

In order to land the kites, they came down crashing into the stands, which was all planned but looked dreadful to watch. Disney was quick to call the show canceled before it even finished with its 50th Anniversary celebration.

RELATED: Oops! Disney KiteTails Kite Ends up in the Trees

We aren’t the only ones that spotted the dated Walt Disney World vacation ad still in circulation. The comments are quick to note the awkward, old advertising, as Disney KiteTails’ last performance was in late September 2022.

Weeks after the Disney Park’s show ended, the Walt Disney World sponsored ad post is still circulating without an update to the theme park feature image.

Hopefully, someone from the advertising department will spot this Walt Disney World mistake and work to remove the sponsored ad… or at least change the photo from Disney KiteTails to a different Disney experience that is still available at the Parks.