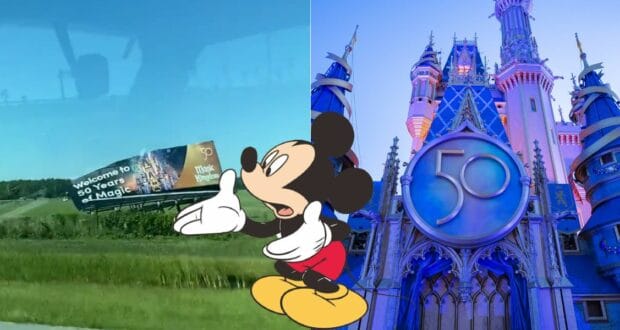 Whether you’re driving or flying to Walt Disney World Resort in Central Florida, chances are there are a few landmarks that tend to become part of the vacation experience. One of these landmarks for many is a Walt Disney World billboard that Disney has seemingly forgotten.

Memorable Disney Park vacation landmarks are those buildings, mile markers, or even airport terminals that provide that “almost home” feeling. And if there is one thing we know for sure, it’s the Disney fandom that loves nostalgic theme park billboards.

RELATED: And Just Like That, One Iconic Disney Twilight Zone Tower of Terror Billboard Is No More

It wasn’t too long ago Walt Disney World tore down its Twilight Zone Tower of Terror billboard on World Drive and replaced it with the landscape. The Disney fandom still struggles with that one.

On the flip side, The Walt Disney Company has added a massive new digital billboard featuring its 50th Anniversary Fab 50 character sculptures, which can be seen from I-4 as it wraps a parking garage. While the digital billboard has had some issues, it is a stunning focal point for the busy highway filled with Disney, Universal, and Orlando tourists.

But, roughly an hour away from Walt Disney World, one of Disney’s 50th Anniversary billboards has seemingly been forgotten.

In early October, we noticed the Walt Disney World Anniverary billboard, when exiting I-95 to I-4, was bent backward, looking like it could fall any minute.

So, when driving by a month later in the same direction, we were curious if Disney had replaced or at least attempted to fix the billboard. Sadly, the forgotten billboard remains in its eyesore state.

The billboard shows an image of Cinderella Castle at Magic Kingdom Park for its 50th Anniversary, but as you can see in the video tweet below, it’s anything but magical:

The billboard location is roughly an hour from the Disney Parks, near Daytona Beach, but it’s still a highlight for those driving south in Central Florida to the theme park.

Here’s the video of the Disney billboard almost a full month ago:

We aren’t sure if the damage was from Hurricane Ian’s path at the end of September 2022 or if the sign is simply old and needs repair. Either way, you’d think Disney would quickly repair the issue.

Hopefully, Disney will notice and fix the forgotten billboard in the near future as it prepares for holiday travelers.

2022-11-07
Jamie Sylvester
Previous: Have You Tried These Underrated Walt Disney World Snacks?
Next: Our Favorite Holiday Treat is Back at Hollywood Studios