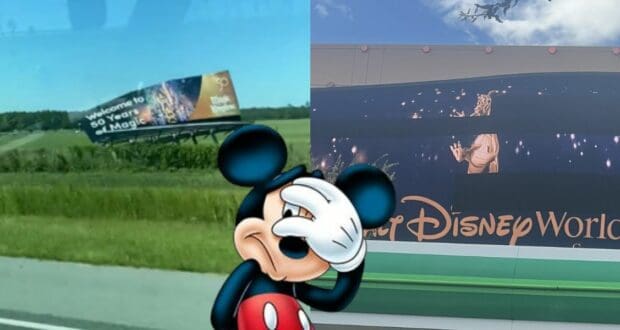 Disney knows how to catch the eye of passersby on some of the most popular roads surrounding the Walt Disney World Resort. But, right now, Disney billboards are catching the attention of Disney fans for all the wrong reasons.

When driving south on I-95 and exiting to I-4 towards Walt Disney World Resort, the beloved Disney billboard featuring the 50th Anniversary looks tired! The iconic billboard says, “Welcome to 50 Years of Magic!” but the supports are sagging in the back.

The billboard location is roughly an hour from the Disney Parks, near Daytona Beach, but it’s still a highlight for those driving south in Central Florida to the theme park. Check out the video captured below:

Related Article: And Just Like That, One Iconic Disney Twilight Zone Tower of Terror Billboard Is No More

While the billboard videoed above is hopefully a quick fix, we aren’t sure what steps need to be taken to correct the damage to Walt Disney World’s brand-new electronic billboard along the popular I-4/International Drive corridor in Orlando.

The massive ribbon-like Disney billboard wraps the outside of the Hollywood Plaza garage and features characters such as Mickey Mouse, Minnie Mouse, and other Fab 50 golden sculpts for the Resort’s 50th Anniversary celebration.

RELATED: NEW Disney Store Coming to MCO, and You Won’t Want to Miss It!

If visiting the digital billboard location, Guests will find the first-ever interactive Disney Vacation Club Virtual Discovery Station, which opened on May 31, 2022.

But, sadly, there is already damage to the massive electronic billboard.

@GregInORL took to social media to share a photo of the massive billboard showing the lines streaming through Figment, commenting, “Off with his head.”

Disney’s billboards need a dose of pixie dust! We hope they get the help they need soon enough, as these eye-catching tourist pieces portray a sloppy look for The Walt Disney Company.

2022-10-13
Jamie Sylvester
Previous: Angela Lansbury Moved to Another Country to Save Daughter From Infamous Cult Leader
Next: Hocus Pocus 2- The Softer Side of Witchcraft?