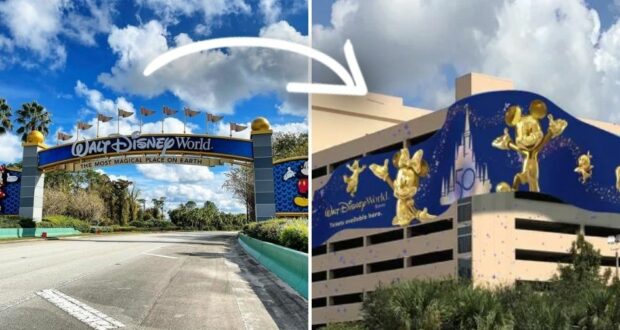 If you’re visiting Central Florida, there will soon be a way to enjoy a dose of Walt Disney World outside of the Resort’s “bubble” of Disney Parks and Resorts.

Take a drive with us down the ever-so-busy I-4 (International Drive) which many of us cruise through when accessing Walt Disney World Resort by car. The traffic woes have been slightly fixed as Florida recently opened its new express lanes which can be traveled with a toll fee.

But, instead of waiting to see that Walt Disney World entrance sign, Disney fans will soon be able to see a new “larger-than-life outdoor art display“. The massive display will be ribbon-like Disney art which will display Fab 50 golden sculptures of favorite Disney characters in celebration of Walt Disney World’s 50th Anniversary. Over time, more Disney characters and celebrations will be on display.

What exactly is a Disney Vacation Club Virtual Discovery Station? Disney has noted it will have floor-to-ceiling screens that can virtually transport Guests to Disney’s theme parks, resorts, and cruise destinations around the world via first-person virtual tours, photo galleries, and videos.

The new Walt Disney World Store will open on May 31, 2022, as the location will be a one-stop spot to provide Central Florida visitors a convenient way to purchase commemorative souvenirs, Park tickets, and explore Disney Vacation Club membership. Check out the shop’s art rending below:

The Walt Disney World Resort bubble has expanded! Don’t forget to look up when driving I-4 to spot favorite Disney characters with the new screen display, and be sure to plan some time to drop in for a visit to the new Walt Disney World Store.