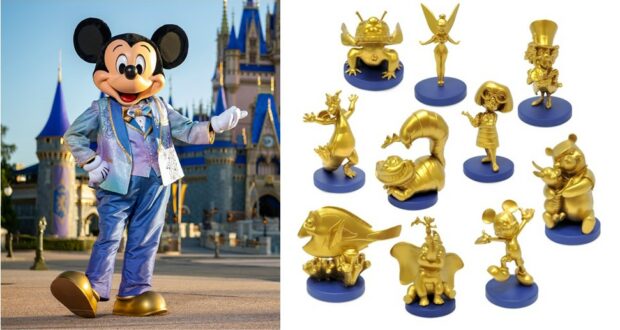 The Walt Disney World Resort 50th Anniversary celebration launched on October 1st and will continue for a full 18 months! One of the new experiences to check out is the stunning Disney Fab 50 Character collection which are sculptures of favorite Disney characters placed throughout Disney World’s Magic Kingdom, EPCOT, Disney’s Hollywood Studios, and Disney’s Animal Kingdom. Now, Disney has introduced a special Fab 50 character collection with miniature figures!

Take note that each box contains 1 randomly selected figure from 10 overall designs in Series 1 which replicate a Fab 50 statue. In other words, you won’t know which figure you have until you open the box. It will however be one of 10 figures in Series 1 which include Mickey Mouse, Dumbo with Timothy Mouse, Tinker Bell, Cheshire Cat, Mad Hatter, Winnie the Pooh with Piglet, Stitch, Edna Mode, Dory, and Figment.

Since this batch is just Series 1, we suspect more series to be released soon enough!

It’s an exciting but risky purchase! If you were to order 10 designs, there’s no certainty which miniature figures you’ll get. The experience reminds us of the McDonald’s Happy Meal toys that featured the Fab 50 characters. When you ordered a Happy Meal, which character you received was a mystery until the box was opened.

Don’t want however if you’re interested in these Fab 50 miniature figures. We saw the Fab 50 ornaments released not too long ago were sold out with shopDisney rather quickly. We suspect these will do the same!

Are you taking adding these Fab 50 figures to your collection? Let us know in the comments.