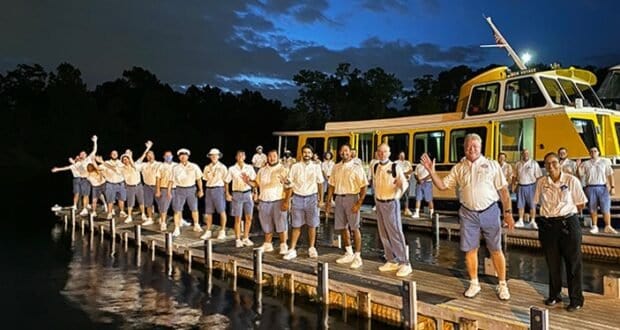 Walt Disney World Gets A New Boat for First Time in 28 Years!

Walt Disney World is in full celebration mode as they have officially kicked off “The World’s Most Magical Celebration” honoring 50 years of magic making! While we’re thrilled to experience new nighttime spectaculars such as the Disney Enchantment at Magic Kingdom Park, Harmonious at EPCOT, and Fab 50 Disney Character Collection throughout the Parks, a newbie has taken to the sea! That’s right – for the first time in 28 years, Walt Disney World Resort has welcomed a new ship to its fleet cruising Bay Lake and Seven Seas Lagoon.

Of course, when you think about boats at Walt Disney World, chances are your mind goes to a massive ferry boat that hauls Guests to and from the Transportation and Ticket Center and Magic Kingdom Park. If you’re staying at a Disney Resort near Magic Kingdom, however, such as Disney’s Polynesian Resort, Disney’s Grand Floridian Resort, Disney’s Wilderness Lodge Resort, Disney’s Fort Wilderness Resort, and Disney’s Contemporary Resort, you may have taken a much smaller vessel from Disney’s fleet of motor cruiser boats to reach the Disney Park.

Disney Parks Blog has shared the exciting news: “Now, just in time for the 50th anniversary of Walt Disney World, a new cruiser has joined the fleet, and its story is pretty incredible. The cruiser is called Tradewinds, a name that was chosen by Walt Disney Imagineering and voted on by watercraft Cast Members. “Trade Winds” refers to the nearly constant wind that blows across the equator. And it’s the perfect name for this new vessel since watercraft Cast Members have constantly delivered remarkable Guest service across Bay Lake and the Seven Seas Lagoon since the fleet was launched.”

RELATED: Get Paid To Drive The Boat Around Disney’s Sassagoula River at Port Orleans!

Disney goes on to share: “But the name isn’t the only thing that Cast Members helped to choose. Watercraft Cast Members offered feedback that directly impacted the design of the vessel, from the position of the pilothouse to the amount of cabin space available to Guests.  “We solicited feedback from Cast Members about the things they would like to see in a new motor cruiser, and we put it into the boat,” said Transportation Guest Experience Manager Collin Garton. “Everything about it was made to make Cast Member input a reality.”

We have personally been on this new water transportation on day two of its introduction to the seas and it’s a beautiful, smooth boat ride across the water. Not only that, but the Cast Members manning the ship are so proud to talk about the new boat! You can’t miss this newbie on the water with its bright orange, yellow, white, and teal coloring.

We love the photo above of Cast Members gathering together to christen the new boat transportation as a nautical tradition before Tradewinds made its maiden voyage. It’s the first new motor cruiser to join the fleet since 1993 (nearly 30 years!), so the excitement the Cast Members feel is well deserved!