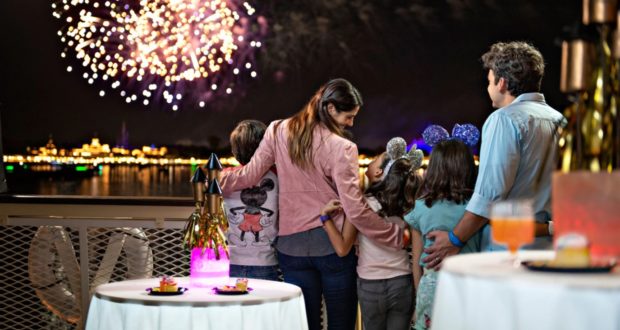 Get ready to sweeten your night while visiting Walt Disney World Resort! Nighttime spectaculars are back in action at Disney’s Magic Kingdom with the current show “Happily Ever After”. As you may have heard by now, “Happily Ever After” is about to go into Disney history with the last chance to see the show coming soon on September 29. While we will greatly miss the nighttime spectacular “Happily Ever After”, Disney has announced they will be topping that performance with an even better one. A new Magic Kingdom Park nighttime spectacular called “Disney Enchantment” is on the way in and scheduled to arrive on October 1 in time for Walt Disney World’s 50th Anniversary – “The World’s Most Magical Celebration“. If you want an extra special way to watch the Magic Kingdom show, “Ferrytale Fireworks: A Sparkling Dessert Cruise” is returning soon!

Disney talks about the fireworks dessert cruise as, “An Enchanting Sail Awaits: Climb aboard one of Disney’s most iconic ferryboats for an unforgettable evening on the Seven Seas Lagoon. Start by checking in at the Transportation and Ticket Center, where you’ll be greeted with a refreshing beverage before setting sail. Then let the ferryboat’s crew regale you with an entertaining backstory of the vessel’s magic. Once you cast off, the celebration continues with a stellar selection of bite-size signature treats, from KABOOM! Cupcakes and Rocket Burst Popcorn Push-Ups to Red Velvet Wow! Pie and Grand Finale Key Lime Tarts. You can even Build Your Own Mousse. All this alongside a bevy of specialty drinks—either with or without alcohol-themed to the sparkling, shooting stars of the fireworks. For the kiddos, there’s also an ultraviolet scavenger hunt. So whether you’re sipping a glass of Firecracker Fizz, nibbling on a tasty sweet, or discovering blacklight clues, you’re a part of the magnetic magic that makes this cruise so special and unique. And when it comes time for the grand finale fireworks to light up the sky over the Castle, be sure to grab a spot along the ferryboat’s railing and slip on your “Mickey Vision” glasses—they’ll transform your viewing experience into the most delightful way.”

Whether you’re staying at one of the Magic Kingdom Resorts such as Disney’s Contemporary Resort or Disney’s Polynesian Village Resort or just want a unique view, this ferry boat dessert party is such a one-of-a-kind memorable experience as your Captain parks the boat in an exclusive spot for the fireworks!

The Walt Disney World website shows Ferrytale Fireworks: A Sparkling Dessert Cruise will be opening on September 18, 2021. The Dessert Cruise only takes place on select nights, and the cost for admission is $99 for adults and $69 for children ages 3 to 9 (tax and gratuity included) and even includes a special takeaway surprise. Be sure to make those reservations well in advance as dates do tend to fill up and same-day reservations can be made but on a limited basis. Check availably and all the “Know Before You Go” details here. Enjoy your fireworks cruise views and dessert party, Disney fans!

2021-08-26
Jamie Sylvester
Previous: Another Magic Kingdom Favorite Reopens Next Month!
Next: Disney Talks All Things Ariel, But Still Quiet About “Voyage of The Little Mermaid”