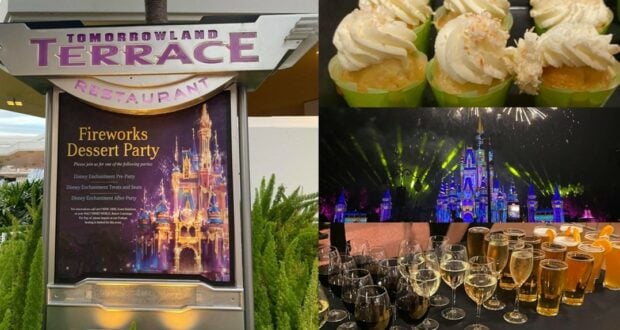 “The Most Magical Celebration on Earth” is well underway at Walt Disney World Resort! Disney is celebrating 50 years of magic-making with special experiences that launched on October 1, 2021, and are scheduled to last a full 18-months. What’s needed to make any Disney experience extra magical? How about fireworks and desserts?! That’s right, Disney has returned the fireworks dessert party at Magic Kingdom Park. Just like before with Happily Ever After Fireworks Dessert Party, three-party options are now available at select nights at the Magic Kingdom. We had a chance to experience the very first dessert party on October 3, 2021, and wanted to share our experience with all the Disney fans out there!

First, yes, we do miss Happily Ever After nighttime spectacular. While Happily Ever After joined the Wishes graveyard, we were excited to check out the debut of the new Magic Kingdom nighttime spectacular, Disney Enchantment. While we personally enjoyed the show, we will say we don’t think it matches up to the level of Happily Ever After or Wishes. The new addition of projections on Main Street, U.S.A. is rather impressive, but the music and projections on Cinderella Castle seem to be lacking something. Nonetheless, we still recommend every Disney fan must check it out and see it for themselves! Adding in the Dessert Party makes the experience all the better, but keep in mind that the location of the dessert parties does keep your view of Main Street, U.S.A. projections rather limited.

There are three dessert party options currently available for Disney Enchantment Fireworks Dessert Party. Each of the three Magic Kingdom Dessert Parties is slightly different, but all feature the same food and beverage options:

On October 3, we experienced the “Disney Enchantment After-Party”. From personal experience with the three parties when they were available for Happily Ever After, we found the after party to be our favorite of the three options. The pre-party experience feels rushed. We can remember trying to eat quickly so we could pick our spot in the Plaza Gardens. The dessert party that takes place in the terrace during the fireworks is wonderful if you want an actual seat. Unfortunately, the view of the Castle and fireworks is a side view. We personally enjoy checking in for the party, finding a great place in the Plaza Garden, and enjoying the show. As Guests rush out after the fireworks down Main Street U.S.A., we simply head on over to the Terrace to enjoy desserts and let the rush go.

The check-in time for our After-Party was 8:00 pm. Each party has a different check-in time. There were three lines forming in the Tomorrowland Terrance for check-in. One line was near the purple wall and Fab 50 Stitch sculpture for the “Treats & Seats” party inside the Terrace during the fireworks. Another line formed on the right near the Fantasyland entrance to Tomorrowland Terrace for the Pre-Party. Our check-in line for the After-Party was on the left side. Look for the signage so you can be sure you are in the correct line.

We got in line around 7:15 pm to ensure we would get a good spot in the Plaza Gardens. Check-in began around 7:40 pm, 20 minutes before the scheduled 8:00 pm check-in time. Cast Members went through the line asking to see the ID of anyone that is planning to drink alcohol. Once they have checked for 21 years and older, we receive a special drink band. Then, Cast Members asked us to come forward in line to receive another wrist band once they ensured our names were on the list.

Once we were all checked in, we were told to go to the East Plaza Garden located near the Tomorrowland Terrace. At that point, we walked through the hub grass to pick a spot we felt would be best for fireworks. Take note that some parts of the Plaza Garden are blocked off for handicap and ECV party-goers and their families.

The crowds outside of the Plaza Garden were insanely packed already and we felt like true VIPs to have space to move around. We took a seat and waited for Disney Enchantment to begin at 9:00 pm. We did notice some Dessert Party Guests didn’t arrive in the Plaza Garden until closer to the 9:00 pm showtime. They still had plenty of space to enjoy the show, but maybe not the most ideal location in the Plaza Garden as they were towards the very back. Still… all good views!

While the view isn’t perfect of the full Disney Enchantment projection and firework experience, it’s pretty darn close! Yes, there are people with you in the Plaza Garden so you do need to stand up for the show to see. With room to spread out, however, it didn’t matter if a tall person stood in front of you as you could just move slightly elsewhere. The show was beautiful and even though it may not be Happily Ever After, it still felt like Disney magic. Plus, the Plaza Garden is a great place to spot Tinker Bell flying by!

After the show finished, a Cast Member escorted the group of After Party Guests (which she knew because of the color of our wrist bands) back to the Tomorrowland Terrace. Here we were checked in once again and walk to a reserved table. Tip – need to use the restroom after the nighttime spectacular? While there is a restroom right outside of the Tomorrowland Terrace, there is also one available for Dessert Party Guests inside the Terrace with typically no wait.

Let the FEAST of delectable desserts begin! The buffet of desserts had mirror sides, so if one line is long, go to the other side of the buffet for the same goodies. The desserts were bountiful and we were impressed by the amount of helpful Cast Members and quick replenishing of the treats as Guests made their way through the line. Everything was sweet tooth-focused with the exception of the much-needed cheese and crackers. While you may not think you’ll want cheese and crackers during a dessert party, it is a nice salty hit to the taste buds when they have been overwhelmed by sweets!

Ready to break down the delicious offerings? Take note that Cast Members were informing Guests that many of the special treats had Magic Kingdom restaurants attached to them and were selected for Disney’s 50th Anniversary celebration. For example, the Chilling Chamber Pop (yum!) can be found at Sleepy Hollow.

The list of drool-worthy items included in our Dessert Party experience was as follows:

Oreo Cheesecake Mouse: Topped with Crumble (can be found at Cinderella Royal Table)

On top of all the yummy desserts a Disney fan could dream of, you’ll also find a large selection of unlimited beverages including beer and wine. Drink selections included Veramonte Chardonnay, Zolo Signature Red Blend, Villa Rose Moscato d’Asti, Paul Cheneau Lady of Spain Cuvee Cava, Bud Light Lager, and Blue Moon Belgian White Ale. There was no limit to how much beer and wine you can have, so eat and drink until your heart is content.

Of course, there are also several other non-alcoholic beverages including Iced Tea, Milk, POG Juice, Lemonade, Strawberry Lemonade, and Water. YES – we did say POG Juice! Plus, there was a nice assortment of coffee and hot tea options.

One person in our party has a gluten allergy. The Cast Members were ready to accommodate the allergy but placing the plate in front of the Guest filled with treats. All items were approved by the Chef for the gluten allergy, and no items were pulled directly from the buffet to avoid cross-contamination. Disney Cast Members also went above and beyond to acknowledge birthday and anniversary celebrations!

The Disney dessert party lasted until right around 10:15 pm when most Guests started to leave while some lingered in the space enjoying another drink or two. We definitely wanted to keep eating and drinking but it was easy to fill up on all the goodness!

Overall, we felt like the money we spent to enjoy Disney Enchantment and the desserts and beverages were well worth the expense. We highly recommend the Magic Kingdom Dessert Party if you are one that prefers to avoid crowds before the fireworks show. There weren’t any food or beverages items we tried that we can honestly say we didn’t like. The Cast Members (shout out to Nick!) were exceptional and extremely helpful. Ready to experience one of the Disney Enchantment Fireworks Dessert Party offerings? Be sure to snag your reservations 60 days in advance as the Disney Park parties do fill rather quickly. Happy planning your magical evening at Magic Kingdom, Disney fans!