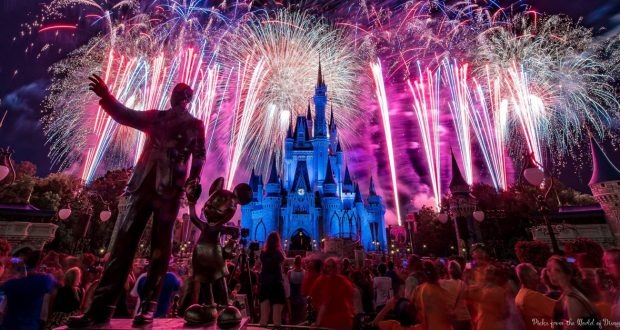 Each of the three Magic Kingdom Dessert Parties is slightly different, but all will feature the same food and beverage options and begin on October 3, 2021.

Whichever party you choose from, you will note that Disney has included “Drink selections will also be available, including an assortment of beer and wine for Guests ages 21 and over.” In the past, Magic Kingdom’s fireworks dessert parties (AKA “Happily Ever After Dessert Party”) offered sparkling cider along with other non-alcoholic beverages. With that being said, there was a rare occasion when Guests noted having a beer and wine option while at the Happily Ever After Dessert Party, but it was never part of the noted offerings and didn’t seem to be consistently available. Why the official addition of alcohol now?

We’ve seen the slow progression of alcohol making its way into Magic Kingdom Park, from previously being banned from Magic Kingdom at Walt’s request. When Walt Disney World opened in 1971, the Park was a “dry” Park, meaning no alcohol was allowed to be served from any restaurant, kiosk, or booth. Walt’s popular quote is: “No liquor, no beer, nothing. Because that brings in a rowdy element. That brings people that we don’t want and I feel they don’t need it.”

At the other Disney Parks, including EPCOT, Disney’s Hollywood Studios, and Disney’s Animal Kingdom there is a plethora of alcohol. Of course, you’ll also find plenty of alcohol selections at Disney Springs and all of the Walt Disney World Resort Hotels. Magic Kingdom still remains the one Disney Park without beer carts and lounges. You can however now get your hands on alcohol if you know where to look.

When the popular Be Our Guest Restaurant opened at Magic Kingdom in 2012, to the surprise of many, alcohol was on the menu. Following suit, we’ve now seen the addition of alcohol at many of the Magic Kingdom table service restaurants such as Tony’s Town Square, The Plaza Restaurant, Diamond Horseshoe, and Jungle Navigation Co. Ltd. Skipper Canteen. Alcohol is still unavailable at quick-service locations.