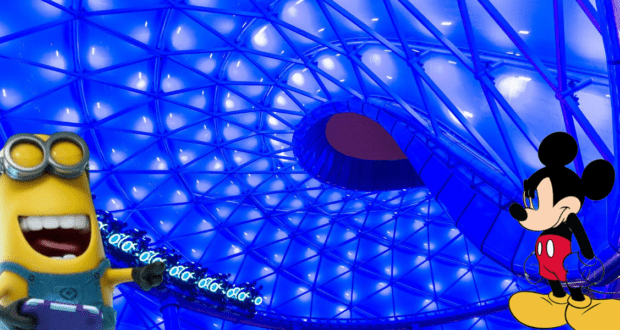 The social media team at Universal Orlando is widely known for their sense of humor, sarcasm, and wit. Usually, this means taking aim at Disney and throwing some pretty epic shade. The two competitors are fiercely locked in a battle for dominance in the theme park industry, but Universal takes the lead, almost always, for their snappy comebacks on Twitter.

In case you missed it, the Walt Disney World Resort recently took to Twitter with a cryptic message that took Disney fans by storm. In the end, we were right…the tweet was meant to be a hint about the opening of Tron: Lightcycle Power Run. Check it out here:

As usual, Universal was ready to make fun of the overly complicated hint with one of their own:

Universal’s “hint” was just for the sake of humor, though, because we already knew that Minions (banana) were replacing Shrek (onion).

IT WAS A HINT ALL ALONG! https://t.co/ZJUEAGEZqW

The theme park wars are an endless source of entertainment, even if Universal is the only one playing. The merciless ribbing is hilarious, and the constant need to one-up each other is a win-win for everyone, especially the consumer. When one park announces something big, the other usually isn’t far behind.

Yesterday was a HUGE day for Disney news. New shows. New Park Hopping changes. New Park Pass policies, the end of resort parking fees … it wasn’t the news we wanted per se, but it was a great start (please, Disney, Dining Plan…we beg you!)!

Today, as if it was planned all along (spoiler alert…it most certainly was), Universal came with big news of their own! A brand new destination, aimed specifically at families with young kids, in Texas and a year-round Halloween Horror Nights-eqe experience coming soon to Las Vegas, were the big stories of the day… so far. This Tweet has us wondering if they’ve got more up their sleeves today:

What a ROLLER COASTER day of announcements.

Could they be announcing a brand new roller-coaster today? Overhead photos from the Epic Universe construction site definitely show a coaster in the works, but so far, Universal has been silent on the details. Could this be a hint that an announcement is coming soon? We hope so. Check this coaster out… it looks like it’s going to be amazing:

Another possibility is that this is just more shade. If Universal Orlando did, in fact, wait to make their announcements until after Tron was announced, this could’ve been a not-so-subtle “in your face” to Disney. Time will tell, but in the meantime, we are on the edge of our seats!