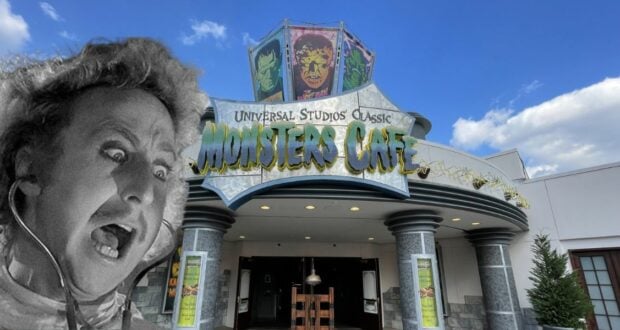 Universal Fans Are NOT Happy About Nostalgic Eatery’s Replacement

Universal Orlando is thriving as it continues to welcome Guests for new and exciting experiences at both of its Parks, including Islands of Adventure and Universal Studios Florida.

While we know much of Disney’s competitor is focused on the construction of its third theme park, Epic Universe, the massive project isn’t stopping Universal from working to bring more excitement to its current Parks.

The big news was revealed that a new Minions-inspired attraction called “Illumination’s Villain-Con Minion Blast” will be opening next year in the former Shrek 4D attraction building in Universal Studios Florida.

And just down the path from this new attraction, Universal has also revealed it will be transforming the nostalgic Monsters Cafe into Minion Cafe.

To the disappointment of Universal fans, Universal Orlando closed Monsters Cafe on May 13, 2022, with Universal reporting, “After more than 20 years of serving dreadfully-delicious quick-service menu offerings, Monster’s Café in Universal Studios Florida permanently closed in the spring of 2022 to make way for a new dining experience.”

Now, the big news has dropped that rumors of a Minions takeover have proven to be true.

@OrlandoInformer took to social media to share, “JUST ANNOUNCED: Monsters Café is being transformed into the Minion Café! It opens next year.”

Monsters Cafe was the home to props and artwork that celebrated the history of Universal’s eerie creatures and classic monsters such as Dr. Frankenstien, Wolfman, and The Mummy.

Not only were the props a highlight at the quick-service style restaurant, but Guests could order “Monster Combos,” which featured favorites like the Invisible Man (beef brisket), the Flying Saucer (cheese pizza), the Wolfman (BBQ chicken pizza), the Black Lagoon Salad, the Mummy (Vegan cooked jackfruit), and Supernatural Sides.

RELATED: Do Better Universal! Lessons to Learn from Disney World

“Despicably Delicious: A mischievous day spent in Super Silly Fun Land can work up quite an appetite. Luckily for you, a new dining location has arrived with an eclectic selection of sandwiches and more. Feast your eye(s) on some of the despicably delicious items you can enjoy at Minion Cafe!”

And yes, the Hollywood menu does have the Minions’ favorite…. BANANAS… with the yummy Nutella Banana Pudding.

Despite the excitement surrounding the Minion attraction, it seems like Universal fans prefer the Monsters Cafe over a Minion Cafe, as several tweet their disappointment:

Is the Minion push just a little too much for Universal fans?

One person tweets, “The decision making is mind-blowing… a staple to the Park for yet another awful despicable me attraction…” A response, however, backs Universal’s decision with, “If you saw the actual visitation numbers for Monsters Cafe, you’d understand.”

But, the negative comments outshine the positive ones.

Statements like, “Worst. News. Ever.”; “No one is happy to hear this”; “Nooooooooooooo”; and “Lame,” fill the feed.

We suspect with Illumination’s Villain-Con Minion Blast attraction opening “Summer 2023,” the opening of Minion Cafe will follow the same timeframe.

As always, we will continue to keep Disney Dining readers updated as we learn more about this new eatery, Minion Cafe, just minutes from Walt Disney World’s gates.