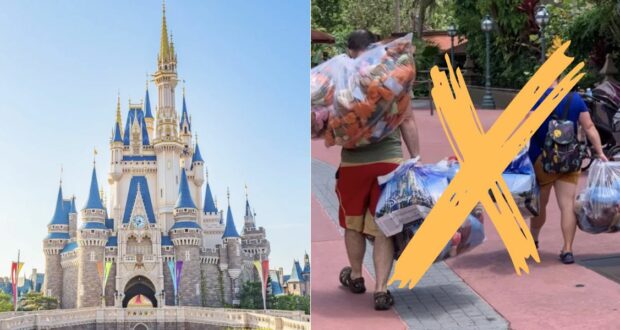 It seems like one Disney Park is tired of its merchandise being purchased in bulk, then being resold for profit by Disney resellers. In an effort to stop resellers, Tokyo Disney Resort is banning merchandise resale.

It’s no secret that Disney merchandise is highly collectible. When Walt Disney World released its 50th Anniversary merchandise, for example, there was a swarm of Disney resellers attempting to purchase as much of the merchandise to resell at a higher price online.

While many Disney Parks have implemented the rule of an individual Guest being limited to two items per sale transaction, inevitably, resellers seem to sneak through the regulations and end up with bags full of merchandise to sell later on eBay or Disney blog sites.

Now, Tokyo Disney, the Park where we’ve seen resellers using fake babies to get more merchandise, is attempting to put a stop to the reseller madness.

RELATED: Disney’s Newest Product Sells Out In Minutes, and Resellers are Going Strong

Under Tokyo Disney Resort’s “Theme Park Terms and Conditions” on its website, the Disney theme park notes under “Prohibited Acts” the ban on reselling merchandise.

The website notes, “Customers shall not engage in any of the following acts when using the Park. In addition, the violation of this paragraph shall be reasonably determined by the Company based on rational grounds.”

The list of acts includes some of the obvious such as “Damage to facilities” and “Nuisance/violence towards Cast Members,” but it also now includes “Purchasing products or souvenirs for the purpose of resale.”

@_TDR_Update_ took to social media to report the update with, “We have established the “Theme Park Usage Agreement” that summarizes the rules and precautions for using the Park. It will be applied from December 21, 2022 (Wednesday).”

This isn’t the first time Tokyo Disney Resort has stepped up to block annoying Guest behavior. In September 2022, the theme park effectively banned vlogging and other activities in its Parks to have a grasp on social media influencers’ wrongful nuisances.

While Walt Disney World Resort and Disneyland Resort don’t yet have a ban on vlogging in their Parks (with the exception of a recent Space Mountain update), Walt Disney World has recently put out a warning about Guest behavior to all of its current and future Disney Park Guests.

Will other Disney Parks follow Tokyo Disney’s example and ban the resale of merchandise? Only time will tell!

As always, we will be sure to keep Disney Dining readers updated as we learn more about this new policy at Tokyo Disney Resort.

2022-12-19
Jamie Sylvester
Previous: How 2023 Will Look Different at Walt Disney World
Next: Amber Heard Drops Appeal Against Johnny Depp Verdict, Continues to Claim She Was Victim of “Domestic and Sexual Violence”