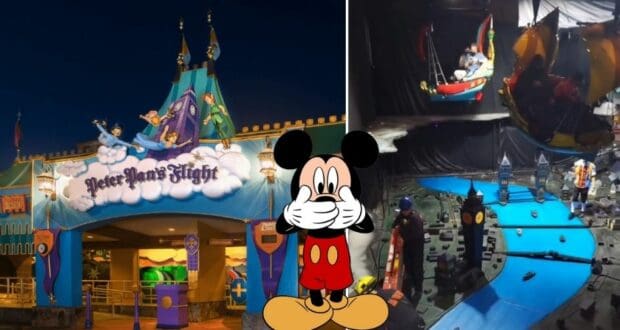 It happens! Even in the most magical of places such as a Disney Park, attractions get stuck and mishaps happen. A recent clip is surfacing on social media showing Guests stuck on Magic Kingdom’s Peter Pan’s Flight attraction, as the fire department comes to the rescue with a ladder.

We recently saw over at Disney’s Animal Kingdom Kilimanjaro Safaris had a broken down vehicle which led to an evacuation. Over at EPCOT Guests were stuck on top of a hill on Frozen Ever After. And recently, at Magic Kingdom, Space Mountain and Tomorrowland Transit Authority PeopleMover were evacuated due to smoke coming from a refrigerator.

From attraction malfunctions to situations where Guests caused the issue (such as the boy that jumped out of the Splash Mountain boat), while it’s rare… you never know if your ride will be unexpectedly interrupted.

This time, the mishap took place at Walt Disney World Resort’s Magic Kingdom Park. The popular Peter Pan’s Flight attraction in Fantasyland stopped. With an above head track guiding Guests through Neverland, a ladder was needed to exit the attraction.

The Mickey Mouse with the clip saying, “Oh no! The ride. It’s broken” fits perfectly. Here’s a screenshot of the video for a better look. You’ll see the ships above the London scene with the lights on which is rare to see for this normally dark ride. The firefighters are on the left in the photo bringing in the ladder while a Cast Member stands below on the right.

Well, it must have been an exciting adventure around Neverland, to say the least! Hopefully, Captain Hook and Tick-Tock Croc stayed far away during the evacuation. Thanks to the Cast Members and the Fire Department for the safe evacuation of the attraction’s Guests.

2022-02-28
Jamie Sylvester
Previous: Disney Fans Are Liking What They See! Starcruiser Is Fully Booked for MONTHS
Next: Disney’s Newest Cruise Ship, the MS Disney Wish vs. the RMS Titanic