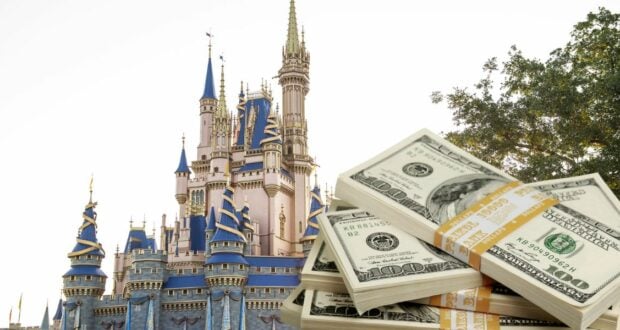 If you haven’t visited Walt Disney World Resort in five or more years, you’ll want to hold onto your wallets as you read this one! Here’s a list of Disney’s former free items and what they cost Guests now… just five years later.

The COVID-19 pandemic in 2020 seemed like it was a reset button for The Walt Disney Company. Several complimentary Disney Park and Resort perks disappeared, leaving fans now doing their best to save every last penny possible for a Disney vacation.

So, taking a family of four as an example, here’s what was free just five years ago that will now hit the Disney budget.

Not a local to Walt Disney World Resort? Not only have airline tickets climbed in price but Disney’s complimentary Resort Guest transportation to and from the Orlando International Airport (MCO) is gone. That’s right, with no more Disney’s Magical Express, that $0 airport transportation has disappeared.

Now, for a family of four to use Mears Connect transportation, Guests can expect to pay $128 (at $32 per person for a roundtrip) to go to and from a Disney Resort and MCO.

Let’s say you decide to rent a car or drive to Walt Disney World. Resort Guests were once eligible for free parking at the Disney Resort. But Disney did away with these with fees that depend on your Resort status of Value, Moderate, or Deluxe.

Resort Guests were also provided a complimentary MagicBand upon a Disney Resort stay. With that perk gone, if Guests want a standard MagicBand, they will need to pay.

Guests staying at a Disney Resort can pre-purchase a solid-colored standard MagicBand for $10 each. For a family of four, that would be $40.

If you don’t pre-order or are not staying as a Disney Resort Guest, the lowest price you will pay is $20 for the most basic MagicBand (does not include MagicBand+), which for a family of four would be $80.

The heaviest hitter is probably the former complimentary FastPass+ which has now been transformed into an upcharge service called Disney Genie+.

FastPass+ would allow Guests to select a return time for an attraction and skip the normal standby line to save time in the Disney Park. Now, Guests must pay for this perk.

Disney Genie+ is now on a fluctuating fee which means Disney can really charge whatever they would like for the day. As of right now, the price per person has not yet gone above $22 per person per day.

If buying Disney Genie+ for a family of four for a four-day Park vacation, Guests can expect to pay $352 (plus tax).

The now individual Lightning Lane attractions were previously free to experience with the former FastPass+ system.

Want to experience individual Lightning Lane attractions, including Seven Dwarfs Mine Train at Magic Kingdom, Guardians of the Galaxy: Cosmic Rewind at EPCOT, Star Wars: Rise of the Resistance at Disney’s Hollywood Studios, and Avatar Flight of Passage at Disney’s Animal Kingdom?

For this a la carte pricing, in total, Guests can expect to pay around $65 per person or $260 for a family of four to experience these four rides without the wait via the Lightning Lane.

RELATED: Woman Shocks Internet With How Much ONE DAY Of Food Costs at Disney World

On top of these theme park expenses, we’ve seen additional price hikes in tickets, food, merchandise, and even bottled water throughout the Walt Disney World Resort.

Time to take out a loan for the next Disney vacation!

2022-11-09
Jamie Sylvester
Previous: Disney’s Earnings Missed the Mark Falling Well Below Wall Street Expectations
Next: More Disney Closures, Including Some Hotels Have Been Announced Ahead of Tropical Storm Nicole