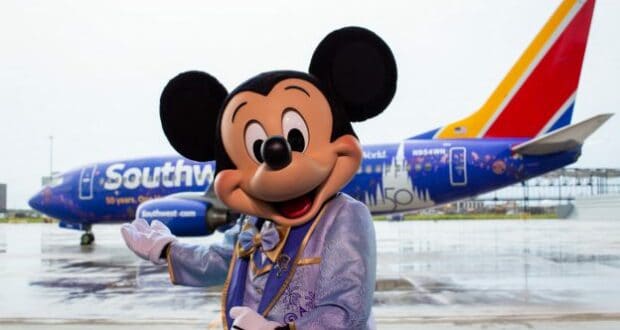 Walt Disney World’s 50th Anniversary week has FINALLY arrived! We’re beyond excited to celebrate “The World’s Most Magical Celebration” kicking off on October 1 and lasting a full 18-months. The celebrations in the Disney Parks are offering a load of magical pixie dust with new nighttime spectaculars, a new attraction, and new experiences unlike ever before! With Disney honoring the past, present, and future, they have announced they are teaming up with Southwest Airlines and taking to the skies!

We previously shared the exciting news that Orlando International Airport has received a dose of 50th Anniversary magic. A complete art installation featuring beloved Disney characters as Fab 50 Character Collection has taken over the terminal train stations at the airport. Plus, outside the Magic of Disney Store in the East Hall, there are projections of EARidescent light patterns along the walkways and thoroughfares of that part of the airport. Now, the decor goes beyond LAND as it takes flight!

RELATED: Flying in for Disney World’s 50th? You’re in for a real treat at Orlando International Airport!

As shared by Disney Parks Blog: “This afternoon, before media and special Guests in Houston, Southwest Airlines unveiled a very special 737-700 — dramatically pixie-dusted, nose to tail, in colorful graphics commemorating the 50th-anniversary celebration of Walt Disney World Resort. Fanciful Disney accents also brighten the cabin space – down to the pulldown shades. Awesome, isn’t it?  Today’s surprise reveal at Hobby Airport filled the hangar with the joyful sounds of music and included Disney characters, Mickey Mouse and Minnie Mouse, in the EARidescent fashions they’ll wear throughout the 18-month celebration in Florida, beginning Oct. 1. Southwest also celebrates 50 years of flying in 2021, so this special aircraft is a double scoop of festive for two great brands.”

Disney goes on to share, “To underscore the collaboration, the decorated plane flew its maiden flight to Orlando International Airport, where the arrival experience has been transformed with fantastical Walt Disney World Resort 50th anniversary celebration décor. So now “The World’s Most Magical Celebration” extends to the land AND the sky.  Let the celebration begin, and congrats to Southwest Airlines for 50 years.”

How fantastic is THAT?! From the 50th Anniversary logo to the blue shimmer… it’s beautiful! We’re pretty sure our mouths would drop if this stunning plane came to pick us up for our magical getaway to Walt Disney World. Are you planning your 50th Anniversary visit with air travel? You may just have a chance to catch a ride in the sky with this beautiful 50th Anniversary plane as Disney and Southwest team up!