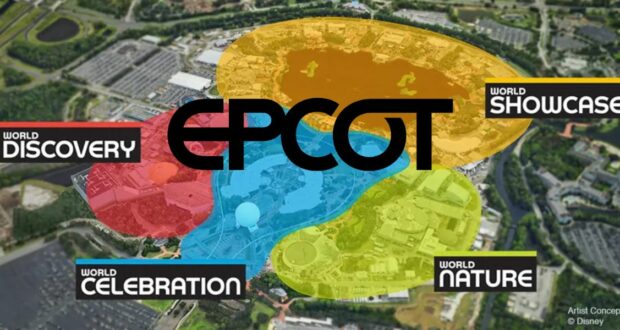 EPCOT Gets a New Addition to Reflect Its Four Neighborhoods

The massive EPCOT transformation is well underway at Walt Disney World Resort. With all of the construction underway at the theme park, Disney has now unveiled a new addition reflecting its new “four neighborhood” approach.

It wasn’t too long ago that EPCOT was known for having two main lands, including Future World and World Showcase. The Walt Disney Imagineering team has been hard work transforming these two lands into four “neighborhoods,” which include World Celebration, World Discovery, World Nature, and World Showcase.

World Discovery has seen some of the largest transformations thus far with the addition of the popular indoor roller coaster, Guardians of the Galaxy: Cosmic Rewind. Additionally, the fan-favorite Test Track resides in World Discovery along with the new restaurant, Space 220.

World Nature is currently one large construction zone as we see the new walk-through attraction, Journey of Water Inspired by Moana take shape for its “Fall 2023” opening. Guests can continue to enjoy experiences such as Soarin’ Around the World and The Seas with Nemo and Friends.

The World Showcase has kept its name in the transformation and has seen the new addition of the France Pavilion expansion, which holds the family-friendly Remy’s Ratatouille Adventure ride.

But, this newest addition isn’t taking place WITHIN any of these neighborhoods. Instead, Disney is adding a new addition to EPCOT’s parking lot!

@ScottGustin took to social media on January 20, 2023, to share the following photos along with the report, “NEW: The EPCOT auto plaza marquee will get a new look later this month. And starting today, character-themed parking lots will be added that includes “some of the heroes and sidekicks who represent concepts” in EPCOT: Crush, Dory, HeiHei, Moana, Rocket, Gamora, WALL-E, and Eve.”

The EPCOT parking lot will be split into two themed sides, including Earth and Space. Disney adds that the changes to the parking lot “reflect the identity of EPCOT and its four neighborhoods, celebrating the magic of possibility and stories inspired by our real world made fantastic.”

The image above shows the eight Disney characters that will be used for the EPCOT parking lot with Earth being represented by Moana, Hei Hei, Crush, and Dory. Space is represented by Wall-E, Eve, Rocket, and Gamora.

Unfortunately, there are still crickets on the Disney World parking lot news we are all really hoping to hear… When are the EPCOT parking lot trams returning? Disney initially promised trams would be available before the end of 2022, but as we wrap up January 2023, we’re still waiting. Disney Park trams have returned to both Magic Kingdom Park and Disney’s Animal Kingdom, but EPCOT and Disney’s Hollywood Studios trams are still missing.

Lastly, if you decide to use the My Disney Experience App’s newly added Car Locator, the app has already added the new characters to help Guests capture their vehicle’s location.

As always, we will continue to keep Disney Dining readers updated as we learn more about EPCOT’s transformation, with hopes this parking lot addition means all Disney theme park trams could be making a return soon.

2023-01-20
Jamie Sylvester
Previous: Where to Get the Best Beers at Disney World
Next: Love Them or Hate Them? New Disney Cast Member Costumes Get Mixed Reviews