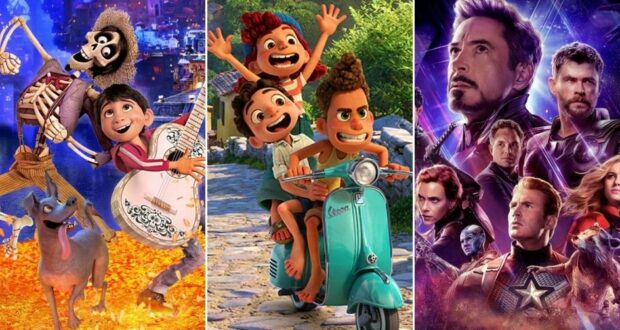 If you’re a Disney movie buff, you’ll be pleased to know Disney dominated 2021 with streaming movies, as the recent results reveal Disney taking 11 of the 15 spots on Neilson’s 2021 Top Streaming Movies list!

Nielsen, the global leader in measuring behavior across all channels and platforms, shows Disney+ taking streaming movies to the next level. Not only did eleven Disney films land at the top, but Disney+’s popular WandaVision took the 14th slot on the 2021 Top Streaming Series Programs (Originals).

Which 11 Disney films had the most views among streaming movies?

Last but not least on the list, Avengers: Endgame slid in at spot number 15. The Marvel Studios film was an instant success when it debuted in 2019, and even though it’s been a couple of years, it’s still one of the most popular Marvel films of all time. The only other Marvel movie to make the list was Black Widow with landed in the 11th spot. Black Widow hit both theaters and Disney+ Premier Access on the same day in 2021 which led to much controversy and Black Widow star Scarlett Johansson threatening to sue Disney.

Disney’s live-action Jungle Cruise (2021) made it to spot number 10 as Dwayne Johnson (Skipper Frank) and Emily Blunt (Lily) wowed with their impressive performances. And yes, a Jungle Cruise sequel has been confirmed!

A Disney favorite villain reaches the 8th spot on the top streaming list. Disney’s live-action Cruella (2021) was both intriguing and surprising as it kept us on our toes as we found ourselves cheering for the “bad guy”. The smashing box office success had deemed Disney film worthy of a sequel as well.

But wait, we’re not don’t talking about Frozen just yet! Following the 2013 original film, Frozen 2 landed in 2019. Results from 2021 show Frozen 2 beating out Frozen for the 4th spot on the top streaming list. It’s no surprise that the Frozen franchise is still going strong with upcoming Frozen-themed dining on the Disney Cruise Line’s newest ship, the Disney Wish. Plus, a new Frozen-themed attraction is in the works for Hong Kong Disneyland.

Climbing the latter, you’ll find the number 2 and 3 spots are held by Disney’s animated films, Moana (2016) and Raya and The Last Dragon (2021). Both films feature strong woman characters learning their place in the world amidst much hardship and uncertainty.

And coming in at number ONE… Luca! That’s right, Disney Pixar’s Luca (2021) takes #1 on Neilson’s 2021 Top Streaming Movies list! Luca skipped theater release and dropped for free on Disney+ on June 16, 2021. It was the perfect summer film that boosted Disney+’s streaming numbers to high levels. Luca, the sea monster, finds a best friend (Bruno, who is also a sea monster) that shows Luca his land legs as they explore the beautiful Italian Riviera together.

Next up, we suspect Turning Red, Disney Pixar’s newest release coming on February 28, will reach the same levels as Luca as it will be free of charge. Currently set for theaters, Disney recently pulled the film for Disney+ release only.

Here’s the full Neilson’s 2021 Top Streaming Movies list as reported by Deadline below:

How many of these 11 Disney+ streaming movies did you watch in 2021? Let us know in the comments!