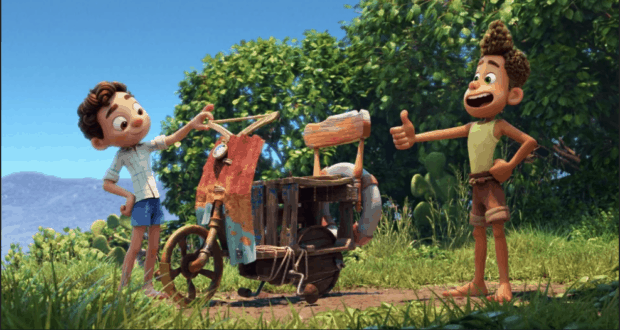 Luca is the Perfect Summer Film

Luca is the newest film from Pixar and the first Disney+ Original since we saw Flora & Ulysses in February. The themes throughout the film (humor, adventure, friendship and family) make Luca a perfect film for this summer.

Luca tells the story of Luca Paguro, a thirteen-year-old sea monster who suffers from the same thing Ariel from The Little Mermaid has, an overwhelming curiosity about the humans and the land they live on, which is considered an irrational obsession to their friends and family. One day Luca meets another sea monster named Alberto, who shows him what life is like out of the water.

This Pixar film doesn’t have a tissue grabbing moment, but instead focuses on a great coming-of-age fantasy.

With the leading group played by Jacob Tremblay (Jack from Room), Jack Dylan Grazer (Eddie from IT), and newcomer Emma Berman voicing Luca, Alberto, and Giulia, these three do a great job bring the story to life together.

Luca is a charming film that is perfect for this summer. It will be available on June 18th on Disney+.