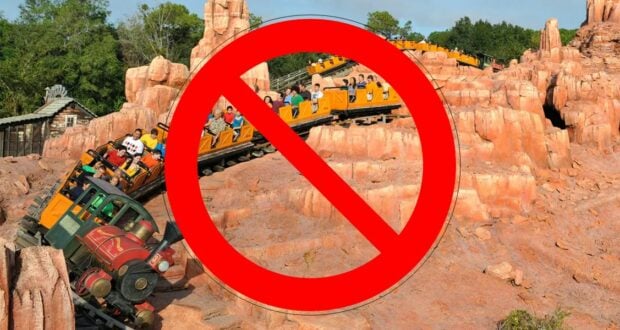 If you are visiting Walt Disney World Resort in the near future, take note that the theme park giant has implemented a new ban on another iconic Magic Kingdom Park attraction effective immediately.

One of the most important must-haves while visiting a Disney theme park is a charged cell phone. While a Guest may prefer to disconnect from their phone while on a Disney vacation, it’s no longer possible.

RELATED: Don’t Take That Apple Device with You Onboard Disney’s “Mountain” Attractions. Here’s Why.

Instead, Disney Park Guests are encouraged to use their phones now more than ever with experiences such as using the My Disney Experience app to look at wait times, Disney Genie+ for Lightning Lane attractions, dining reservations, as well as food and beverage mobile ordering and merchandise check out. A visit to the Disney Parks practically requires a cell phone.

But Disney DOES now want Guests to put phones down while on an attraction. We recently reported that Disney implemented a new policy effective immediately, banning the use of phones while riding the popular Space Mountain attraction in Magic Kingdom’s Tomorrowland.

RELATED: One Disney Resort Had Effectively Banned Influencers, Could the Rest Follow Suit?

@TouringPlans took to social media to share a brief video along with the message, “We got a “no cell phones” announcement today on Big Thunder. A first for us! We put our phones away as soon as it registered- you can hear part of the announcement here.”

The new ban comes at the height of the holiday crowds at Magic Kingdom Park. We suspect the last thing Disney needs while funneling Guests through the popular attractions is having to deal with lost cell phones that have fallen from Guests’ hands while on a ride.

Additionally, take note as “The Wildest Ride in the Wilderness” is scheduled to undergo refurbishment in January 2023, just before its neighboring mountain attraction, Splash Mountain, closes forever.

As always, we will keep Disney Dining readers updated as we learn more about this new cell phone ban on Space Mountain and now Big Thunder Mountain Railroad. We can’t help but wonder if other roller coaster attractions, such as Slinky Dog Dash at Disney’s Hollywood Studios, will be next.