Disney Adults have been around for years, but in 2022, those Mouse-obsessed, Walt-loving, park-hopping, magic-spreading do-gooders got a terrible rap, and they deserved every minute of it. We think.

RELATED: Those Disney Adults Are Awful Human Beings, and Some Are Barely Human at All

In January 2022, news coverage about Disney Adults hit near-viral proportions, as it was discovered that some of the biggest hullabaloo involving Disney-Adulting was being fueled by social media posts online–posts that were made by Disney Adults themselves.

A rash of TikTok videos created by so-called Disney Adults took over the social media platform, many of which involved “content” aimed at creating scenarios in which Disney Parks face characters were forced to “break character” and interact with Guests in ways that weren’t in keeping with the Cast Member carrying out the believability of that character.

Rolling Stone went so far as to call Disney Adults “the most hated people on the internet.”

It’s not only the behaviors of some Disney Adults that make us cringe. It’s often their respective mindsets and reasoning “capacities” (or lack thereof) as well. And these “adults” are fairly loud and forthcoming with the aforementioned mindsets, opinions, likes, dislikes, and justifications for debt-inducing Disney trips–so forthcoming that non-Disney adults make easy targets of them, as you can see in the following images, memes, and “quips” about Disney Adults. 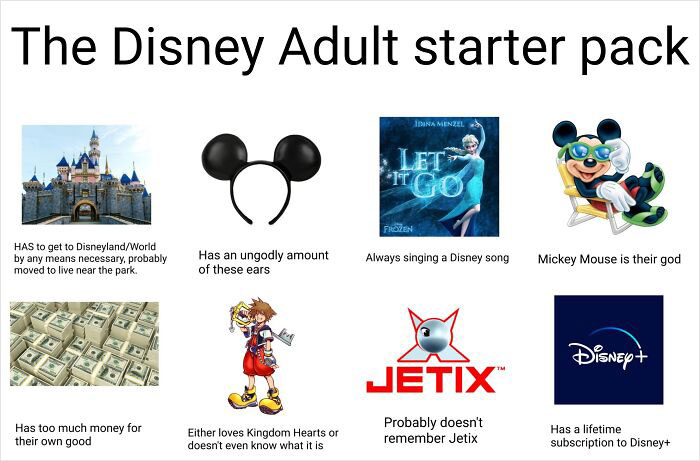 Disney Adults make their loyalties and alliances very clear–so clear, in fact, that in 2022, professionals actually took to looking deeper into adults’ devotion to Disney and the House of Mouse, even going so far as to suggest that such devotion was indicative of a religious-type following. There was even the suggestion that such a following could be likened to the following of cult ideology. 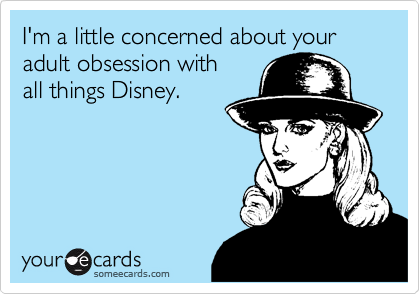 The Walt Disney Company certainly didn’t help things last year when they announced a new venture called Storyliving by Disney, which includes master-planned living communities aimed at allowing Disney Adults to remain in that Disney spirit around the clock. The first of many Storyliving by Disney communities will be located in Rancho Mirage, California, and will be named “Cotino.”

It’s important to point out that many in the California community nearby want no part of a Disney-themed housing community; in fact, they want Disney to get out of their town.

While Disney was busy touting its first of many residential communities, Twitter was having a heyday, poking fun at those so-called “Disney Adults.” 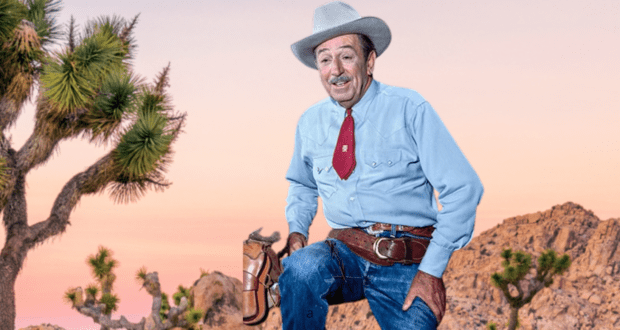 But this writer will go so far as to say that it’s not necessarily these adults’ desire to live in a Disney community that earns them the title of “obnoxious” or “cringe-worthy” Disney Adults. At DisneyDining, we get it–we like to think of ourselves as “Disney Adults,” too–just not the cringey kind.

But for some, it’s a bit offputting when Disney Adults are loud and overtly intentional in drawing attention to their respective Disney obsessions. One couple chose to name their new baby after the place in which she was conceived. That’s not a new thing. But the fact that the name happened to be a Disney name as well surely led the couple to win the attention–however negative at times–of perfect strangers. This particular couple even received labels like “Disney Adults” and “obnoxious,” etc., even though they do not consider themselves Mouse-obsessed at all. 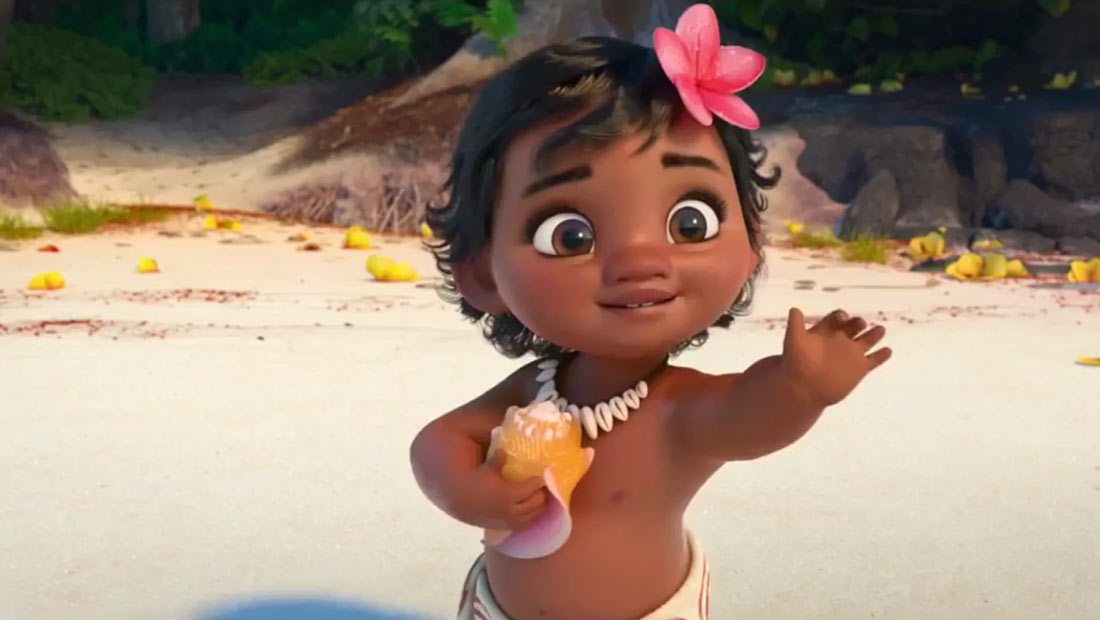 The other side to that coin, however, is that if we are all Disney ADULTS, shouldn’t we be old enough to resist the temptation to care too much about what others think?

While some of the behavior of certain Disney Adults can be questionable and even cross the line, are they really hurting anyone with their Disney preferences, obsessions, and fandom? The most likely honest answer is no. In fact, some of the naysaying that goes against Disney Adults seems to come from a place of misunderstanding at times–and even jealousy at other times. Whether that’s true or not remains to be seen. 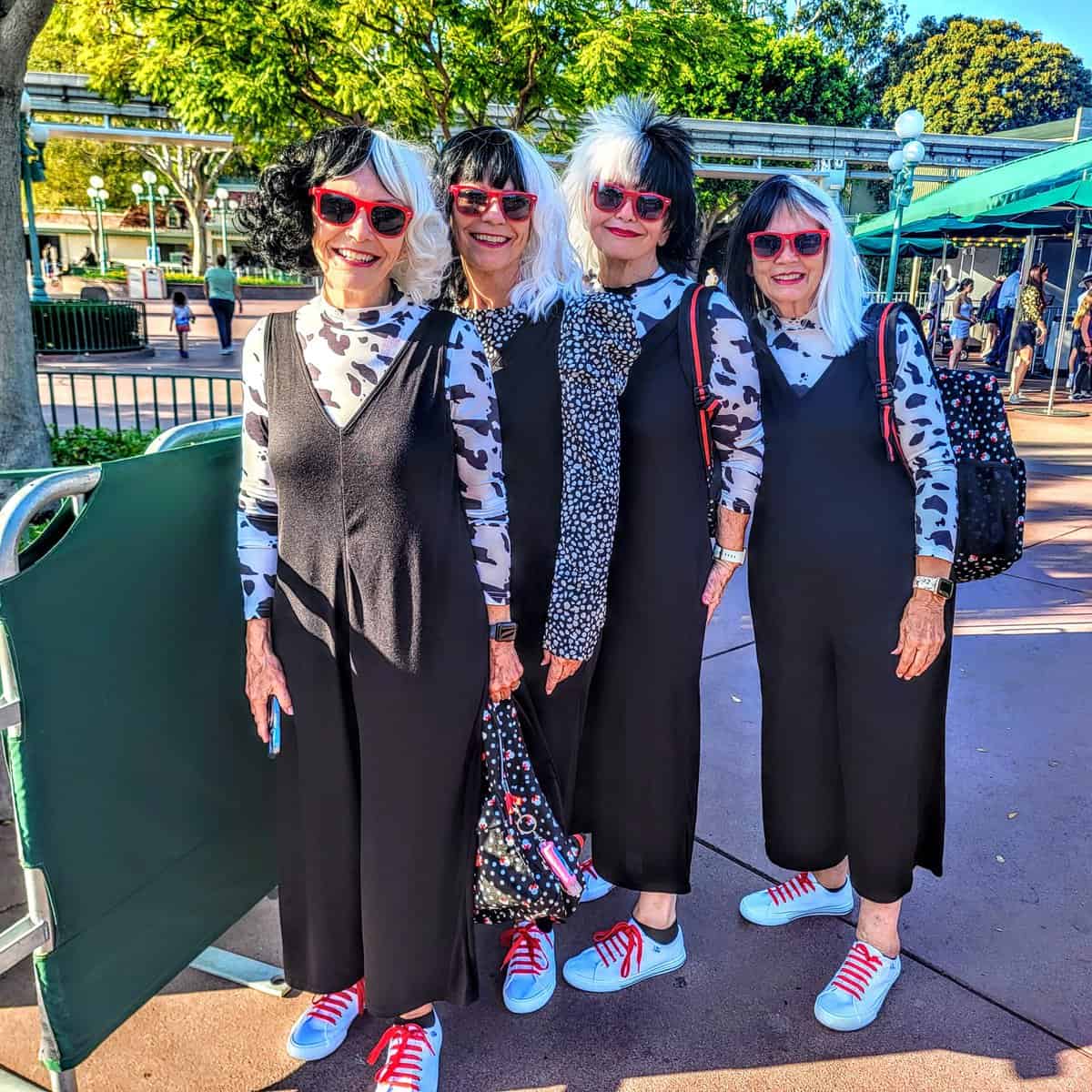 The thing that ultimately has to be remembered when it comes to Disney Adults is this—like with any other activity, hobby, or, some might say “obsession,” if it’s not hurting anyone, others really have no say in it. Those “crazed Disney maniacs” who visit Disney World 14 or 20 times per year really shouldn’t bother you; after all, they are the ones potentially diving head-first into debt, not you.

And since, so far, there’s been no proposed or passed federal legislation calling for non-Disney Adults to pay taxes toward funding for Disney World and Disneyland trips for Disney Adults, do the non-Mickey lovers really have a say?

Here’s to all the Disney Adults out there, including the ones this writer works with everyday. Because in my humble but honest opinion, Disney Adults have that certain knack for finding joy in the sometimes mundane, celebration in the what might seem like minor accomplishments, and hope in the excitement induced by fireworks, a film about the genius of Walt Disney, or the storyline of a new Disney film franchise.

And for us, that makes Disney Adults some of the most “human” beings we’ve met so far.

2023-01-06
+Becky Burkett
Previous: After More Than a Week, Popular Disney Attraction Finally Reopens!
Next: Is Whoopi Goldberg Quitting ‘The View’?