You’ll have to forgive us – we still think of ourselves as 14-year-old teenagers living in the mid-2000s. So when we think of Disney Channel, we think of the OG stuff. To be honest, we probably couldn’t even tell you what currently airs on the Disney Channel. But want to know a super-specific fact about Hilary Duff from 2004? We most likely have the answer to that. Today, however, we want to talk about some of the best classic Disney Channel Christmas episodes from back in the day. And luckily for us, Disney+ has all of these episodes streaming as we speak!

Take a look at some of our favorites with us! Absolute classic. There is a reason this is number one on the list. This is one that we HAVE to watch every single year for Christmas. Not only is Kim Possible an amazing show anyway, the one Christmas special is a blast. In this episode, Ron goes on a mission without Kim, so she can enjoy Christmas with her family. But it all goes horribly wrong when he and Dr. Drakken end up at the North Pole, and Kim and the family have to rescue them anyway. It’s hilariously funny and ends in a song! Phil of the Future – “Christmas Break”

Ever wonder what Christmas will be like in the future? Phil tells us a fun tale of his very first day in the 21st century and how he actually ruined Keely’s Christmas a bunch of times before ultimately fixing it and saving the day. This episode is great because it gives us more backstory on the Diffy family, plus we get that great rendition of “O Robo Tree” at the end. 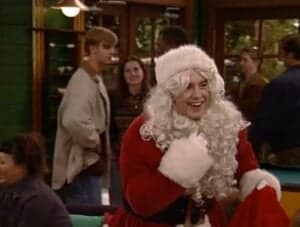 The Christmas episodes of Boy Meets World are ones that hit you in the feels, as it were. While many Disney Christmas episodes are silly and light, Boy Meets World elected for the serious aspects of the season. In season 1, Cory finds out that Shawn’s family is struggling financially this Christmas. It changes his whole perspective of what’s really important during the holiday. And in season 6, Eric meets a little boy who just wants a family for Christmas. These episodes are meaningful and beautiful.

Hannah Montana – “Killing Me Softly With His Height”

This episode, however, is not as meaningful and beautiful, but still fun! We had to spend some time with the Stewarts this Christmas! This episode of the silly show focuses on Miley and a boy who is several inches shorter than she is. It is honestly much less about Christmas and more about Miley’s shallow nature that turns around, but it’s still very fun. Even Stevens – “Heck of a Hanukkah”

Oh, Shia. Back in the good old days, Shia was on this ridiculous Disney Channel show. We love the Christmas episode of Even Stevens because it plays on “It’s a Wonderful Life,” where Louis gets to see what the Stevens family would be like without him. It’s insanely silly and a very typical Even Stevens-style episode.

This episode still gets talked about. Aaron Carter guest stars! Talk about a throwback. In this episode, Lizzie and Gordo volunteer at a toy drive and need to make a fun Christmas float for some reason. Oh, also, Steven Tyler is Santa Claus. This episode is all over the place, but we live for it. We don’t really remember why Aaron Carter is there, but he kisses Lizzie, so that was a great Christmas for her! 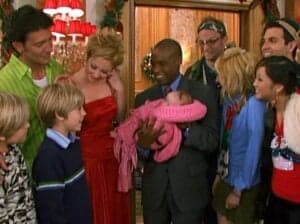 The Suite Life of Zach and Cody – “Christmas at the Tipton”

This is one of our favorite episodes of The Suite Life. Episodes in season 1 are so fun because Zach and Cody are still such babies! In this episode, there is a massive blizzard in Boston and everyone gets snowed in at the Tipton, including the boys’ dad! Cody is hopeful that his mom and dad will get back together, but the main drama is saved for the guests’ Mary and Joseph, who are expecting a baby any day. Everyone helps out as Mary and Joseph have their baby at the inn on Christmas Eve. Sounds kind of familiar, huh? 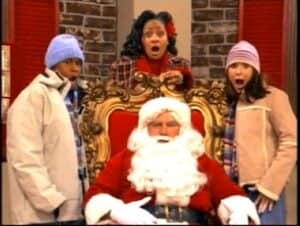 Man, we love this show. We’re so glad we have Raven’s Home to keep us in the Baxter’s lives. In this special Christmas episode, Raven opens her Christmas gift early and ends up breaking it. Chaos ensues. She, Eddie, and Chelsea have to try to replace it before Christmas so no one knows what happened. Obviously, things go horribly wrong and Raven learns a valuable lesson. Gotta love tradition.

Last but not least: Phineas and Ferb. We were blessed with many holiday Phineas and Ferb specials over the years, but the Christmas episodes take the cake. In “A Phineas and Ferb Christmas Vacation,” Doofenshmirtz makes a “naughty-inator” that puts the whole town of Danville on the naughty list. The boys and their friends have to find a way to send a message to the North Pole that Danville is actually good! So great. We love the music in this one too. “A Phineas and Ferb Family Christmas” is a more typical episode. This one takes place during summer vacation, but the boys want to get a jump start on Christmas, so they create their very own family Christmas special! It’s so fun, and we love the guest appearance by Kelly Clarkson.

Related: Get In the Spirit with These Disney+ Holiday Specials