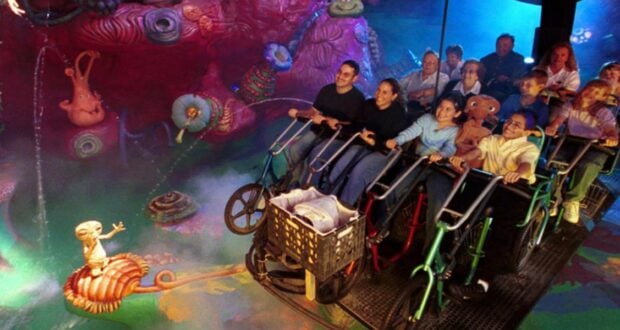 Walt Disney World Resort’s neighboring theme park giant, Universal Orlando Resort, has been dealing with a lawsuit for several years now regarding a child that had his foot crushed on one of Universal’s most iconic attractions, E.T. Adventure.

The E.T. Adventure ride at Universal Studios Florida is a nostalgic one, much like “it’s a small world” attraction at Magic Kingdom Park would be to Disney fans. The attraction star is E.T., the alien from the 1982 film E.T. the Extra-Terrestria.

The Park Guests’ mission on E.T. Adventure is to “Fly With E.T. to His Home Planet.” Universal describes the ride with, “E.T.’s home planet is dying and he needs your help to save it. Board your flying bike and take off on a thrilling (but gentle) ride through the sky. You’ll dodge bad guys and soar into the stars where his magical home awaits, filled with wondrous otherworldly creatures.”

But, what should have been a fantastic Park day at Universal for an 11-year-old child turned into a crushed foot that has been met with Universal finally reaching a lawsuit settlement.

According to a report from Orlando Sentinel, Universal Orlando Resort has reached a settlement with a Brazilian Guest whose 11-year-old son had his foot crushed on the E.T. Adventure ride on January 31, 2019.

RELATED: Universal Called Out For Yet Another Super Restrictive Ride

Mother Roberta Perez began the legal battle for her son’s injury in February 2019 as she claimed Universal was at fault for “unsafe ride conditions.” Her son, Tiago, got his foot stuck between the E.T. Adventure flying bikes (the ride vehicle) and the offloading area at the ride’s completion.

The report goes on to note that “Tiago broke several bones in his toes, foot and leg in a bloody scene, lawyer Ed Normand said following the accident. His mother and lawyers say it left Tiago with permanent injuries that required orthopedic surgery and caused him to be held back a grade in school.”

Tiago’s injury was noted on Universal’s injury report as a simple “foot pain,” as Universal denied Perez’s allegations in court. Instead, Universal suggested the boy injured himself by being negligent. Additionally, his parents were noted to have failed to “properly monitor” him while on the attraction.

Prior to boarding the ET Adventure ride, Guests may note the warning sign that advises Guests to keep their arms and legs inside the ride vehicle. Neither the mother, Roberta Perez, nor her son Tiago could read the English warning signs posted at the Universal attraction entrance as they only speak Portuguese. The lawsuit shows Universal’s attempt to suggest the family should have picked up one of its Portuguese Park maps which translates all attraction warning signs.

Fast forward to January 2023, four years after the incident in 2019, and court records show a lawsuit settlement between the family of the injured boy and Universal. According to the report, “Universal was ordered to pay an annuity to Tiago through a life insurance company.”

Universal Orlando Resort has been a strong competitor for Walt Disney World Resort in recent years. With Universal’s new theme park, Epic Universe, coming soon to Central Florida, Universal is working to appeal to Disney’s week-long visitors to become a week-long destination itself.

Additionally, Universal is spreading out. The theme park giant recently announced it would be welcoming a new theme park to Texas, along with a year-round horror-themed destination in Las Vegas, Nevada.

New lands are also in the works as Universal Studios Hollywood is also preparing to open its new land, Super Nintendo World, in February, along with Universal Studios Florida re-working its former KidZone land.