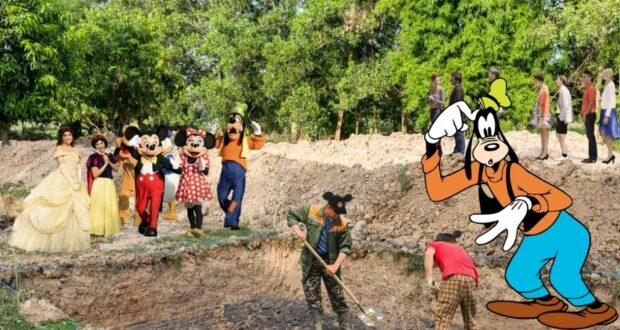 Well, Disney fans, you just never know what will go viral next! This one however had us scratching our heads until we realized it was thankfully a fake news source. Would you want to be buried with your favorite Disney characters? Well, apparently in this fake news world, Disney CEO Bob Chapek is making it happen.

While Disney is currently working on a new “Storyliving by Disney” project inviting fans to live in Disney communities around the globe, along with a second private island soon to welcome Disney Cruise Line Guests… we know the desire to be in and around Disney all the time is apparent for many fans.

Despite Disney’s growth plans and strong fan base, CEO Bob Chapek doesn’t have the greatest reputation. With the addition of Disney Genie, higher ticket prices, and the removal of Guest benefits, Disney fans are petitioning and trying to vote the CEO out of his role.

But, in this fake news, the CEO is unveiling word of a “mass grave where fans can be buried alive with favorite characters forever.” Yes, you read that right!

The Onion is well known for its hilarious fake news that typically leaves readers scratching their heads in disbelief. So without further ado, here’s the reveal of the “news” of being buried with Disney characters…

In what officials at the entertainment conglomerate described as a “thrilling opportunity for fans of all ages,” the Walt Disney Company announced Friday the opening of a new mass grave in which customers can be buried alive with their favorite Disney-owned characters.

“We know that people absolutely love the joyous experience of our theme parks, so why not let them spend eternity with Mickey, Minnie, Snow White, Elsa, Anna, and the rest of their favorite pals,” said Disney CEO Bob Chapek, explaining that a $109 entrance fee would give fans access to the sprawling 200-acre open pit, which will also leverage properties from Pixar, Star Wars, and Marvel as it seeks to become a final resting place for a broad cross-section of media consumers.

“At Disney’s Eternal Kingdom, fans will line up and await their turn to be thrown into a hole in the ground where, as the dirt is shoveled over their still-living bodies, they can slowly suffocate and die with the likes of the Hulk, Winnie the Pooh, Kylo Ren, Buzz and Woody, or the entire ensemble cast of Encanto. Disney Genie Plus users can purchase a Lightning Lane selection and skip the line to pass into the next world even faster—all while choking to death on pixie dust that will be shoveled into their mouths by Tinker Bell herself.”

Chapek went on to announce his retirement, saying there was no more he could do after finally realizing all the goals of Disney’s famed “cradle to grave” business model.

Oh boy! We’ve officially seen it all…. from Walt’s frozen head making its return to now being buried with Disney characters. Of course, we must repeat… THIS IS FAKE NEWS. Bob Chapek gets blamed for just about everything but this is one we can’t blame him for.

Would you want to be buried with a Disney character? We’d like to be buried with “The Underminer” – you know, the supervillain with a massive underground drill from Disney and Pixar’s The Incredibles (2004). This way he can dig us out of that grave!

2022-02-28
Jamie Sylvester
Previous: EPCOT is opening earlier than EVER BEFORE as Disney World adjust opening times at the parks
Next: ‘Dancing With The Stars’ Pro Reveals He Was Arrested in Ukraine