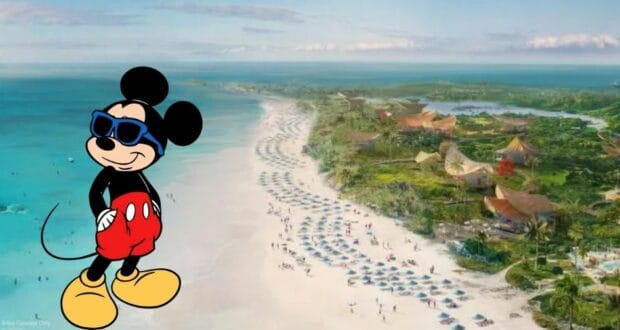 Disney Gets Approval for Its Second Private Island

If you’ve ever sailed away with the Disney Cruise Line, you’ve hopefully had a chance to visit Disney’s private island, Castaway Cay. This island experience is unlike anything we have ever experienced before as it’s like having a slice of the Disney magic while on a tropical oasis to the Bahamas. Now, reports show that Disney has received the approval it needs for a second private island.

RELATED: Watch as Disney’s Newest Cruise Ship, the Disney Wish, Gets Its Feet Wet for the First Time

The new $400 million island project was first announced back in 2019 and was given the name “Lighthouse Point” with hopes of calling the southern tip of the island of Eleuthera home. The massive undertaking of having a second private island is no small feat.

Former Disney architect and designer Joe Rohde researched and studied the possibility of the island experience and promised that Lighthouse Point will highlight the culture of the island and the Bahamas, while still maintaining that Disney magic.

Fast forward to the present, due to the “Heads of Agreement with The Bahamas”, work on the new island project required governmental and environmental permits and agreements to be finalized. Disney Cruise Line has now received all of the required environmental approvals to begin construction on their all-new cruise destination.

According to The Nassau Guardian, President of Disney Cruise Line, Thomas Mazloum stated, “We are so grateful for the support we have received from the people and government of The Bahamas over the past few years. It is because of your engagement and feedback that we have continued to shape the project into something we can all be proud of. I am pleased to share that we have now received all the necessary approvals from the government of the Bahamas to begin our work at Lighthouse Point.”

“As we get started, we remain committed to our guiding principles: creating sustainable economic opportunities for Bahamians, protecting and sustaining the natural beauty of the site, celebrating Bahamian culture and helping to strengthen the community in Eleuthera. We are excited to move this important work forward with you and will continue to keep you updated on our progress and how you can get involved.”

With the construction soon to begin, Disney Cruise Line has said it expects to hire close to 300 local employees to get the island project moving. Local businesses are also expected to benefit from the incoming Lighthouse Point.

Not everyone is thrilled about Disney’s arrival, however. According to The Nassau Guardian, despite Disney pledging to donate a quarter of the land it purchased to the Bahamian government, the project has been met with controversy as “local and international environmentalists have urged the government not to approve the project for fear of the impact the introduction of cruising will have to the sensitive ecosystem of South Eleuthera.”

The Lighthouse Point project timeline is still up in the air. Disney had hoped to begin construction in 2020 with its completion in 2022 or 2023. With the push back to approval coming now in 2022, we suspect it will be close to 2024 or 2025 before the island is ready for Disney Guests. Check out Disney’s details in the video below:

2022-02-27
Jamie Sylvester
Previous: Golden Girls Cruise Takes to the Seas in 2023
Next: Win a Disney Stay In One of Grand Floridian’s NEW Rooms!