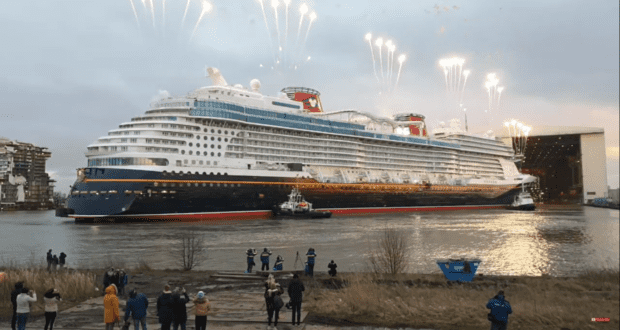 Watch as Disney’s newest cruise ship, the Disney Wish, gets its feet wet for the first time

Though she won’t make her maiden voyage until July, Disney Cruise Line’s newest fleet member has just had her first swimming lesson! 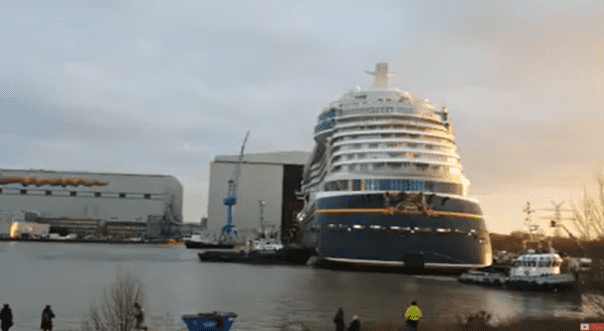 Last week, Disney Cruise Line announced that the sister ship of the Disney Fantasy, the Disney Dream, the Disney Wonder, and the Disney Magic ships has experienced yet another delay in construction. When shipbuilders first began putting together the magical Disney Wish in early 2020, plans were for Disney Cruise Line to take delivery of her in December, granting her a maiden voyage last month–January 2022.

But delays related to the coronavirus pandemic saw Disney pulling out its black Sharpie and marking out those dates on its events calendar; delivery was moved to June 2022. Then last week, Disney’s German shipbuilder Meyer Werft had more work for Disney’s Sharpie, as the date of delivery for the Disney Wish was moved to July 2022, thereby canceling the first 12 sailings already booked aboard the cruise line’s fifth addition to the family. 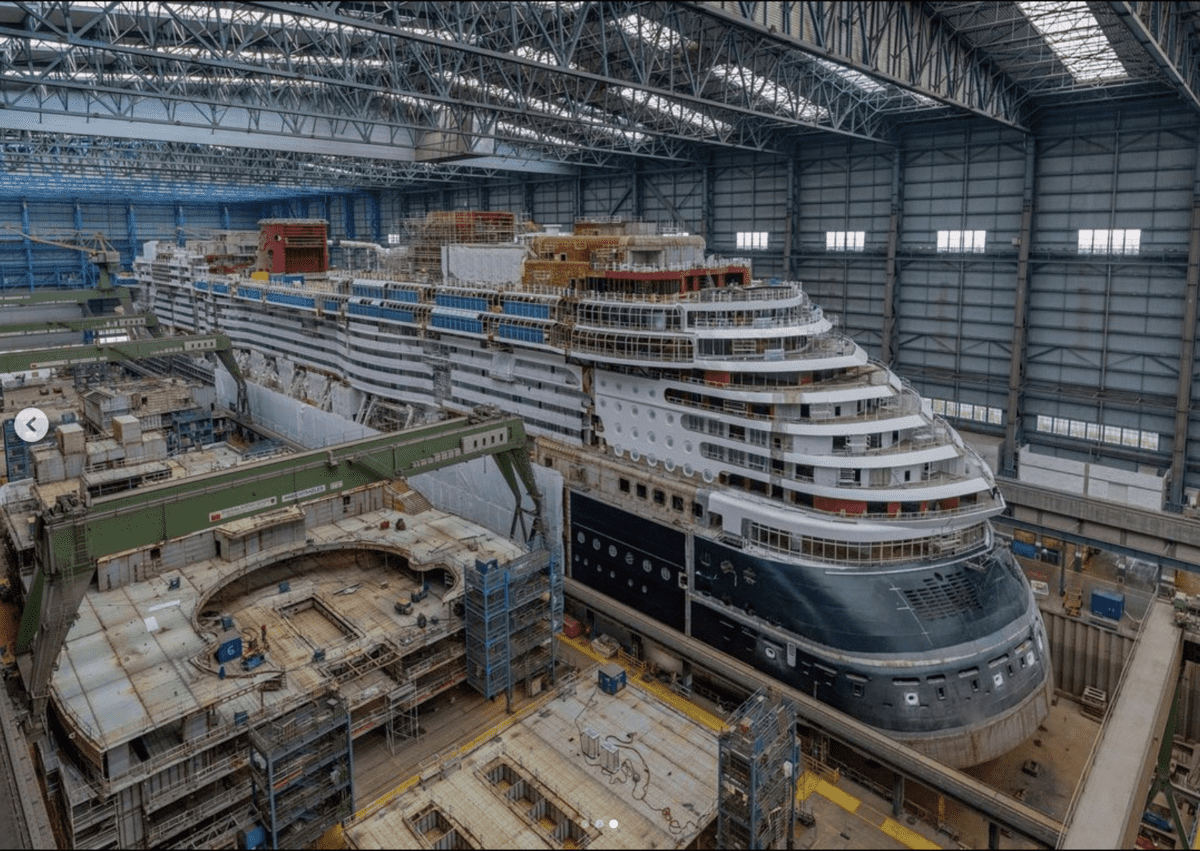 Even so, Meyer Werft continues to move forward with work on the newest ship in the Disney fleet, which has been constructed in drydock. The shipbuilder finished her hull structure in August 2021, but work continued to install two enormous Azipod engines. Crews have been waiting to flood the dock and have her float for the very first time since last week, but poor weather conditions precluded it. 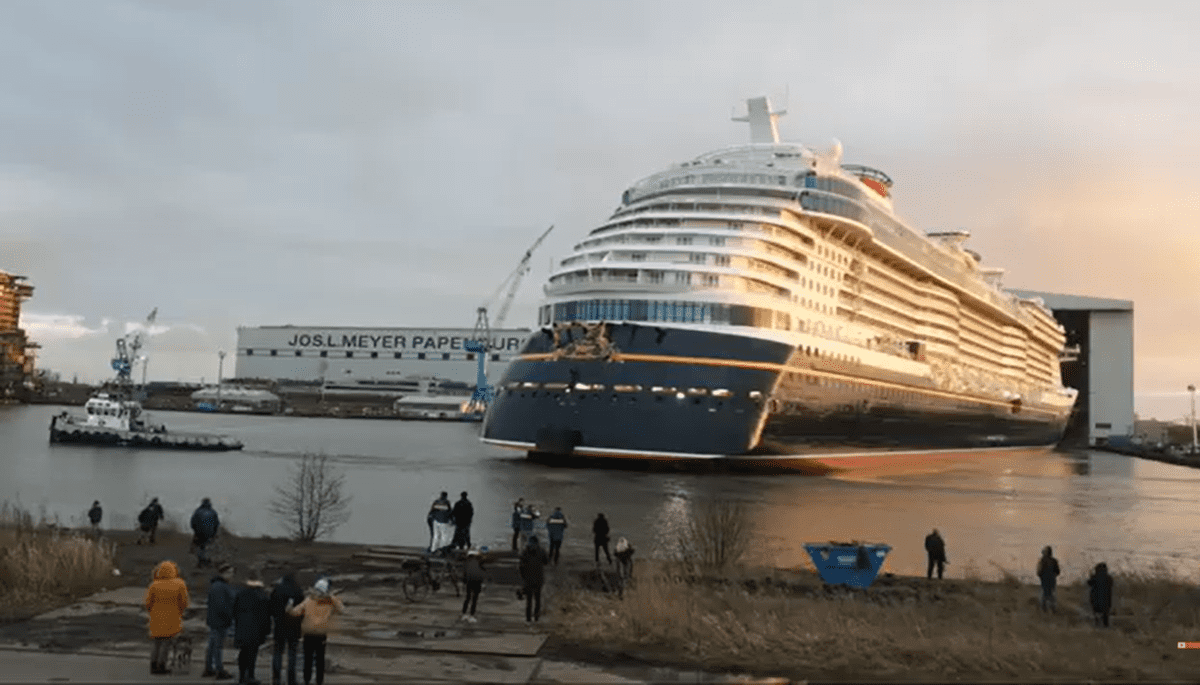 But today, the weather cooperated, and the Disney Wish got her feet wet for the very first time. You can watch the tiny journey in the video below. It’s a lengthy video because the ship moves very slowly, but be sure you skip to the end for a special Disney surprise in the Meyer Werft Shipyard!

The massive 144,000-gross ton Triton-class Disney Wish has been assembled in drydock since construction began in 2020. Since the drydock has now been flooded, the giant ship is floating on her own as work continues to make her ready for the slow 20-mile journey she’ll make to the Ems River to be readied for trials in the North Sea. 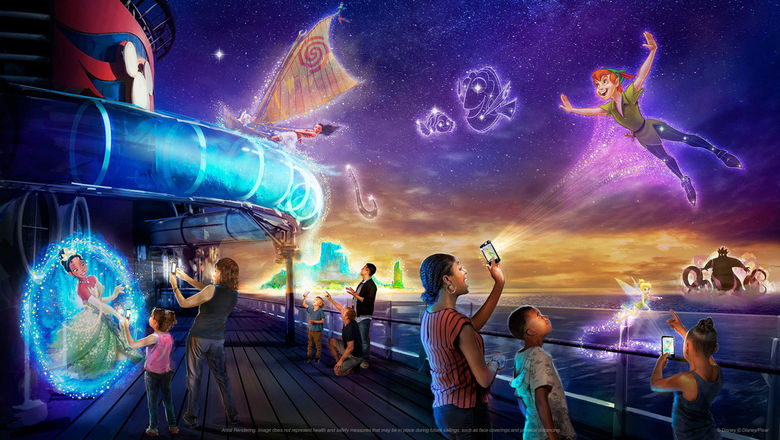 The Disney Wish is the first of three ships ordered by Disney to be built as Triton-class vessels. Two more are coming after her, though they are unnamed as of yet. It’s been almost a decade since Disney Cruise Line hosted a maiden voyage aboard one of its ships: the Disney Fantasy first sailed with Guests in March 2012.
2022-02-11
+Becky Burkett
Previous: Universal Drops Mask Mandate For Vaccinated Guests
Next: The Cheesy Guide to Walt Disney World