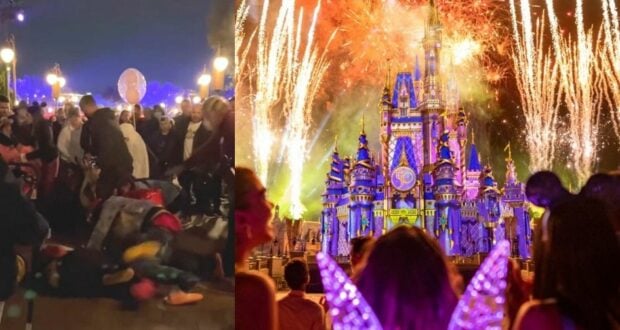 Another Fight Breaks Out, This Time at Magic Kingdom

Well, Disney fans. You just never know what is going to pop up on social media next. This time, we’re seeing another fight unfold. Sadly, the dispute took place at the most magical place of all, Walt Disney World Resort’s Magic Kingdom Park.

It wasn’t too long ago we were sharing news of a fight that happened in Toy Story Land at Disney’s Hollywood Studios. We’ve also sent a recent fight outside of EPCOT’s Living With the Land attraction. This past fall, a video of a fight on Magic Kingdom’s ferry boat also hit social media. But, this time, a confrontation took place inside the Disney Park.

Sadly, this incident seems to be taking place after what sounds like the end of Magic Kingdom’s nighttime spectacular, “Disney Enchantment”. @heather7marie who posted the video to TikTok on January 25, 2022, notes “Just another day at the most magical place on Earth, #waltdisneyworld #fight #girlfight #disney #fyp #disneyworld”. She also places in the comments “Video was recorded last night (01/24/22). The song was put over the video.” The song is from Disney’s “Happily Ever After” which is the former Magic Kingdom nighttime spectacular.

It looks like Guests are trying to move out of the way as two people fight on the ground. A Cast Member is standing by and not intervening as trained to do with Disney security likely already on the way. The worst part is seeing all the children nearby that had to let this be the way they finished their day in a Disney Park.

You can see the video below or find it here:

Even though this video of the Guest fight was posted today, the music does cause some confusion as “Happily Ever After” nighttime spectacular at Magic Kingdom Park ended on September 29, 2021, to make way for the addition of “Disney Enchantment” on October 1, 2021.

The TikTok creator has noted the fight happened on January 24, 2022, and she placed the “Happily Ever After” music over it. You will also spot one of Disney’s new Mickey strollers which debuted on January 20, 2022. Furthermore, @heather7marie posted the video again, this time without the music added as shown below:

Have you ever been to a Disney Park and witnessed something like this unfold? Let us know in the comments.

2022-01-25
Jamie Sylvester
Previous: Does EPCOT Need an ‘Encanto’ Ride? Josh Gad Thinks So
Next: The Best Attractions for Babies in Walt Disney World