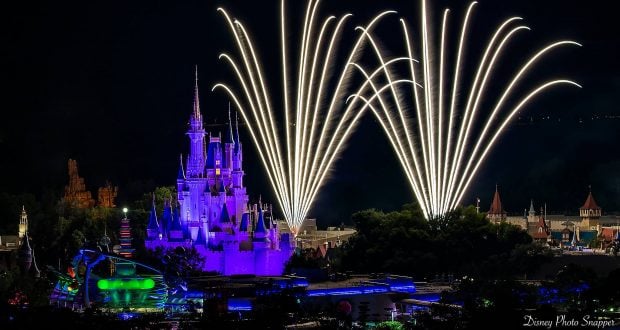 ‘Wishes’ & ‘Happily Ever After’ Music Heard from Magic Kingdom!

Remember Magic Kingdom’s former nighttime spectaculars “Wishes” and “Happily Ever After“? As Disney fans, how could we forget? Well, interestingly enough, one Disney Resort Guest caught Magic Kingdom playing both of these beloved soundtracks after Park closure!

When the 50th Anniversary celebration rolled in at Walt Disney World Resort, Disney introduced us to a new nighttime spectacular that fills the Disney Park nightly with projections, music, and fireworks. The new “Disney Enchantment” isn’t all that bad, but it’s definitely having a hard time filling the shoes of the two previous nighttime spectaculars including “Wishes” and “Happily Ever After”.

Wishes (October 2003 – May 2017) had a LONG run at Walt Disney World’s Magic Kingdom. The music, fireworks, and projections on Cinderella Castle became a family favorite for many Disney fans. The next big nighttime spectacular was Happily Ever After (May 2017 – September 2021) and it did its best to uphold the strong reputation Wishes held.

@ariipariee took to Twitter on January 18, 2022, to share two videos. In the first video, she notes, “Not us staying at Bay Lake and hearing WISHES and HAPPILY EVER AFTER from MK this evening….my fangirling was very obvious. (1/2).” You’ll see noted in the second video “(2/2) here’s Happily Ever After playing tonight from Bay Lake Tower”.

We can’t believe it, but listen to these:

That’s Wishes and Happily Ever After alright! So, WHY are these fan-favorite nighttime spectaculars blasting after hours at Magic Kingdom Park?

We can only speculate that as much as we REALLY (like, REALLY) would love to see one or both of these nighttime shows return to the Magic Kingdom, we are assuming it was for a possible wedding held after hours in the Park. This is not confirmed, however, so we’ll keep wishing upon a star that it could mean something else.

Want to take a moment to remember Wishes? Check out the memorable nighttime spectacular in the video below:

And here’s the full Happily Ever After to bring back memories:

Would you want to see Wishes and/or Happily Ever After return to Magic Kingdom? Let us know which one you would prefer to make a comeback in the comments!