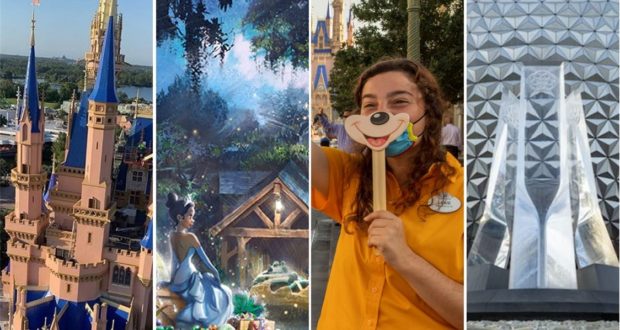 One year ago it seemed like 2020 was going to be a year full of promise at Walt Disney World. We were supposed to dine in outer space, shrink down to Remy’s size, and enjoy a new Cirque du Soleil story. Instead, 2020 had other plans. Some projects were postponed, others canceled, while a couple did move ahead. That doesn’t mean that the year was all bad. Here are some of the major Walt Disney World related stories from 2020. We hope that things will turn around in 2021, and that there will be a glorious celebration for Walt Disney World’s 50th Anniversary in October!

Disney fans were full of opinions when it was announced on Disney Parks Blog that the iconic Cinderella Castle would receive a makeover. Opinions were all over the place on whether or not it was needed. The work started quickly, and it was one of the few projects that continued during the shutdown. Opinions are still all over the place. Some claim that it now looks better than ever, while others say that the colors are too close to Sleeping Beauty Castle at Disneyland. There is one thing about the makeover that most people do agree upon; it looks much better in person than in pictures.

For the past several years Disney’s Hollywood Studios has been a park in transition. In 2018 Toy Story Land opened, and in 2019 it was Star Wars: Galaxy’s Edge. The last piece of the transformation puzzle was Mickey & Minnie’s Runaway Railway, which officially opened on March 4. The ride allows guests to enter the cartoon world. There are more Hidden Mickeys in the ride than anywhere else at Walt Disney World. It’s the type of ride that you have to go on more than once, because there is just too much going on to take it all in. Also on March 4 a new Mickey short debuted at Disney’s Hollywood Studios. Vacation Fun is located in the Echo Lake area, and it’s worth your time. Check out details from our Media Day experience on March 3.

When Walt Disney World announced that it was going to shut down, no one knew just how bad things would get. The closure was a precaution, COVID-19 had barely made it to Central Florida at the time. The original announcement was that Walt Disney World would “remain closed until April 1”, which was later changed to “remain closed until further notice”. The last day of operation for the parks was March 15, with the resorts shutting down the following Friday. Overnight, Central Florida became a ghost town.

In May things started to slowly reopen, with new regulations. CityWalk at Universal Orlando Resort reopened on May 14, and it was a success. On May 20, guests returned to Disney Springs. We were introduced to temperature checks, social distancing markers, and wearing masks in public. Few restaurants and stores opened that first day, but slowly the number grew. While most guests followed the rules, some decided to bend the face covering rule by walking while carrying a drink. That led to several rule changes as far as face coverings are concerned. Check out our video from opening at Disney Springs on May 20.

On May 27 representatives from Walt Disney World presented their reopening plan to the Orange County Economic Recovery Task Force. They proposed that the Magic Kingdom and Disney’s Animal Kingdom would reopen on July 11, with Epcot and Disney’s Hollywood Studios reopening on July 15. Annual Passholders were promised a preview with a limited number of spots. We were told that capacity would be reduced, and that things that draw crowds such as fireworks and parades would be placed on hold. Many people were surprised by the reopening dates, since other area theme parks were reopening in June. Florida Governor Ron DeSantis eventually gave the go ahead for Walt Disney World’s reopening plans.

Although we already knew much of what to expect when the four Walt Disney World theme parks reopened, there was still some question on what would happen at the resorts. On June 6 we learned which resorts would be the first to reopen, and when. We also learned that guests would need to be staying at a resort or have a dining reservation there in order to visit. Traditional Resort Hopping would not be allowed.

Many of us were holding onto hope that maybe Mickey’s Not-So-Scary Halloween Party could somehow take place, but Disney thought better. The 2020 edition of the party was canceled, as well as Disney H2O Glow Nights at Disney’s Typhoon Lagoon. We also learned that there would be no concerts at Epcot.

In order to keep capacity down, Disney decided that reservations would be necessary. The Disney Park Pass Reservation System was introduced. To enter a theme park, you need to have a reservation. Park Hopping was put on hold. To see which parks had spaces, Disney created an Availability Calendar. It is broken into three segments; Theme Park Tickets Guests, Disney Resort Guests, and Annual Passholders. Once the Disney Park Pass System went live it was difficult for Annual Passholders (who can hold only three reservations at a time) to get spots, while the other two categories had plenty of availability. Disney eventually made some changes, making it fairer for all.

Spaceship Earth was scheduled to close in May for a lengthy refurbishment. Many fans were sad because they thought that they would never have a chance to ride the current version again. The refurbishment has been put on hold, and fans can still enjoy the iconic attraction.

Disney announced that Splash Mountain will undergo a major refurbishment and retheming. This will happen at both Walt Disney World and Disneyland. The theme is going to change to “The Princess and the Frog”, and it will take place after the final kiss. Music from the film will be featured throughout the ride. A timeline for the refurbishment has not been given.

In the past a good part of the workforce at Walt Disney World has been made of up college kids in the Disney College Program. It allows them to get some real world experience, and Disney ends up with some hard working employees. When the closure hit the College Program the students were sent home, and on July 2 it was announced that the program has been suspended indefinitely.

Passholder Previews were held at both the Magic Kingdom and Disney’s Animal Kingdom. When registration opened, the spots were gone in a matter of minutes. Some Annual Passholders never received the email link to sign up, which caused a lot of frustration.

After being closed for almost four months, the phased reopening of the Walt Disney World theme parks began. The Magic Kingdom and Disney’s Animal Kingdom opened first. Hours were limited, and many stores and restaurants remained closed. Character Cavalcades were introduced, and were an instant hit. Check out our video from opening day at Magic Kingdom here!

The final two parks reopened four months after the last day that they had been open. Epcot celebrated the Taste of Epcot Food & Wine Festival, which included some of the elements from the shortened Flower & Garden Festival. The reopening wasn’t as smooth at Disney’s Hollywood Studios, which had the longest lines at any of the parks. There were also glitches with the Virtual Queue for Rise of the Resistance.

Most Walt Disney World fans wondered what would happen once the holiday season rolled around. After all, there’s no place more magical than Walt Disney World when it is decked out for Christmas! Some sad announcements were made on Disney Parks Blog. We learned that the Castle Dream Lights would not be hung. There would be no Candlelight Processional at Epcot. Mickey’s Very Merry Christmas Party would not take place. There would be no gingerbread houses in the resorts. There was also some good news. We learned that there would be special Christmas Cavalcades. Cinderella Castle would still dress up for the holidays, in the form of four different projection scenes. We also learned that we would be able to enjoy the Taste of Epcot International Festival of the Holidays.

Even though Mickey’s Not-So-Scary Halloween Party was canceled, that doesn’t mean that fall wasn’t celebrated. The Magic Kingdom was decorated with Mickey-shaped pumpkins on the light poles on Main Street, U.S.A. Some of the Character Cavalcades switched to a Halloween theme, and included the “Boo to You” song from the Halloween Parade. There were also special cavalcades featuring villains or “The Nightmare Before Christmas”. They were immensely popular. Adults were allowed to dress in costume at the Magic Kingdom through October 31. Check out our Fall Media Day experience here.

It never takes long to transition from Halloween to Christmas at Walt Disney World. At three of the four parks some of the cavalcades switched to a Christmas theme on November 6. (The holidays at Epcot didn’t begin until later in the month.) Decorations made everyone feel festive. The Christmas Tree Trail at Disney Springs switched to the Christmas Tree Stroll to allow for more social distancing. While many of the “normal” elements of the holidays at Walt Disney World didn’t return, it still felt like Christmas.

2020 needed to go out on a high note, and what better way than by giving us a peek at the future? Epcot has been a mess for most of the year because of all the construction. Right before Christmas, we were given our first look at Disney’s plans for the future of the park. The new fountain was revealed. There are three 16 foot pylons that take your gaze to the sky. There is still a lot of work to be done at the park, but the beauty of the new entrance shows that Disney’s plans are headed in the right direction.