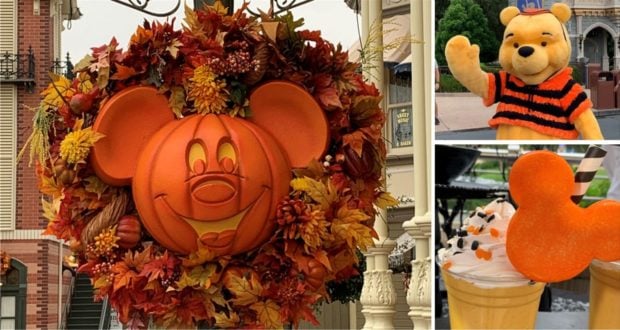 Fall Has Arrived at the Magic Kingdom!

Mickey’s Not-So-Scary Halloween Party is not taking place in 2020, but that doesn’t mean that there is no fall fun this year. The season has arrived at the Magic Kingdom. Like many things, the celebration is scaled back, but there is plenty of spooky magic to be found.

On September 15, I was invited to attend a morning media event, and then I spent a few hours in the park as an Annual Passholder. The first thing that I noticed when I entered the Magic Kingdom was the decorations on Main Street, U.S.A. The main decoration this year is the Mickey pumpkins. There are plenty of them to be found. There are also extra flowers on some of the buildings. There are no scarecrows near the train station, and no giant pumpkins outside of the entrance. The decorations give to the feel of the season, without being over the top.

Some of the Character Cavalcades have been given a Halloween makeover. New for the season are The Nightmare Before Christmas cavalcade and a Villains cavalcade. If you’re looking for something a little less scary you can find Winnie the Pooh and friends, dressed for Halloween. My personal favorite was Mickey’s cavalcade. Mickey, Minnie, and some friends wore their costumes, as the Boo-To-You music from Mickey’s Not-So-Scary Halloween Party played. I did not realize how much I missed it until I heard it again. Video of all four cavalcades available here!

We also had a chance to see some of the special seasonal food and drink offerings. The Hitchhiking Ghosts want to help you to take care of your hunger and your thirst. One comes with donuts, another is a sipper, and a third a popcorn bucket. The Oogie Boogie Popcorn Bucket is back, but you can also get it with churros. The Jack Skellington Sipper returns as well. One of my favorite items this year is the Headless Horseman Rides again. It is made of Strawberry Dole Whip and Fanta, and it comes with a Headless Horseman Straw. It’s a plant-based option, so that means that more people can enjoy it. You can buy it at Sunshine Seasons. Another must-try if you have a sweet tooth is the Pumpkin-spiced Mickey Waffle Sundae. Available at Sleepy Hollow, it features two flavorful Mickey Waffles, as well as vanilla ice cream, lots of whipped cream, caramel, and sprinkles. It tastes just as good as it sounds.

There is plenty of seasonal merchandise now for sale at the Magic Kingdom. There is a good selection of The Nightmare Before Christmas goods. Zero on a Leash is back, it sold out last year. There’s a Giant Snake puppet, some hats, and a bone wreath that will work for both Halloween and Christmas.

Haunted Mansion fans will love their options. While the main color on the wearables is dark gray, there is a small amount of bright green on some to make the items unique. There is a four puzzle set of the Stretching Room. If you want your dog in on the fun, there are Ghost Host and Hostess costumes for Fido and Bella. There is also Clue, Villains Edition, and general Halloween themed merchandise. Little ones who want to transform into princesses can choose from several spectacular dresses. There is also a Minnie-themed dress that has lights in the tutu.

At the beginning of the day the park did feel busy. Although Cast Members tried to keep people apart for the Character Cavalcades, it wasn’t always possible at the beginning of the day. I think that part of the reason why the Magic Kingdom was so crowded the first couple of hours was because it was the first day of the new cavalcades. Once people had seen them all, the crowds dispersed.

Disney has put the costume rule at the Magic Kingdom on hold, they will be allowed through Halloween. There were some guests today wearing costumes. I have a feeling that the number of guests in costumes will go up significantly, the closer we get to Halloween. Disney’s costume guidelines must be followed. Costume masks are not allowed, but face coverings are still required for all guests two years old and older.

The Halloween fun at the Magic Kingdom will run daily through October 31. There is one thing that you will need to keep in mind. The Villains cavalcade and The Nightmare Before Christmas cavalcade will run on “select days”. It has not been released which days they will be on and which they will be off. Also, starting on September 20, you will be able to enjoy the Dapper Dans, as the Cadaver Dans. It has not been said where in the park they will appear, but it will be in a spot where social distancing will be possible.