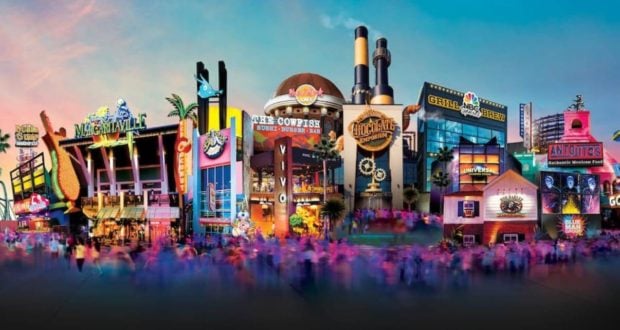 CityWalk at Universal Orlando Resort is OPEN: Photos & Details From Our Visit!

On Thursday, May 14, CityWalk at Universal Orlando Resort opened once again. It had been closed for almost two months. The hotels at Universal and the theme parks all remain closed. CityWalk is currently open 4:00 through 10:00 each evening. Not all places are open, and there are capacity limits and other guidelines that need to be followed.

I was at Walt Disney World the last day that the theme parks were open, and I also went to Disney’s BoardWalk a couple of times after the parks shut down but the hotels were still operating. There was a heaviness in the air, a sadness that could be felt. The reopening of CityWalk was the exact opposite. There was joy in the air. Both guests and team members (that’s what they call Universal employees) seemed thrilled to be back.

In case you aren’t familiar with Universal, you park in a garage. From there you’ll head towards the Attractions signs. You’ll then end up in a main area, where there’s a store. This is also where you’ll go through security. After that there’s another moving sidewalk, which leads to CityWalk. You’ll go through CityWalk to get to Universal Studios or Islands of Adventure. (The third park, Volcano Bay, is not part of the main complex.) CityWalk is along the same concept as Disney Springs, but it’s much smaller. It’s mostly shops and restaurants, and there is often live entertainment. Much of CityWalk is run by third party companies.

I arrived about ten minutes before 4:00. Normally it takes me about 45 minutes to get to Universal, but because the traffic is so light on I-4 right now I was there in half the time. They were not yet letting people park. The parking fee has been suspended, at least for the time being, and there is currently no valet parking. About two minutes before 4:00 they let the cars in the garage.

They had everyone park on the third level, at least at the beginning. This made sense, because that is the level that you need to be on to get to bag check. On any other level you’ll need to take an elevator, escalator, or the stairs, which means touching more things. Parking was well thought out. Cones were placed in the garage, blocking off every other space. After the row was full and everyone was out of their cars, the team members removed the cones and people then parked in those spots. This allowed for full use of that level of the garage and social distancing at the same time.

One major addition was the temperature check station. This was easy and touchless. A team member, wearing gloves and a full clear mask, used a touchless thermometer. It took no more than three seconds. All guests go through security at Universal Orlando Resort, even those who aren’t going to the theme parks. Instead of looking through people’s bags, your things go through an x-ray machine. It’s similar to what you’ll find at an airport. They’ve done it this way for a while, but I appreciated it more now, since no one was touching any of my belongings.

There was no real crowd at CityWalk. Outside of the restaurants that were open there were markers for where to stand. There were lines to go into the large stores, since they have to be kept at 25% capacity or less. I didn’t go into any of those stores because I did not intend to buy anything, and I didn’t want to take another person’s spot. I did have a nice chat with someone who works for Hart & Huntington Tattoo Company. They are open, but only for retail business. She told me that they had a steady stream of customers, and that everyone was obeying the rules.

That was honestly one thing that impressed me. Everyone was so happy to be there that they didn’t mind the rules. It was a warm afternoon and the sun was bright, but everyone was still wearing a face covering of some type. Whether or not you think that people should wear face masks during this doesn’t really matter. They are required at CityWalk, and will also be required next week when Disney Springs begins to reopen. These are private properties, they can set a face covering rule.

There was some entertainment at CityWalk. A group of drummers welcomed everyone from above as we entered the area. There were some stilt walkers who were also wearing masks. There was live music at Margaritaville. I left before dark, so I don’t know if more entertainment was planned, but there was already more than I expected.

When I left, I was definitely encouraged. I never once felt scared or thought that there was something that they could have done differently. They even had sinks blocked off in the restrooms, so that two people wouldn’t stand too close to each other as they washed their hands! There were stations with hand sanitizer, and there were extra signs to remind people to wash their hands. We may have a long way to go before things are fully open again, but this was a small step in the right direction.