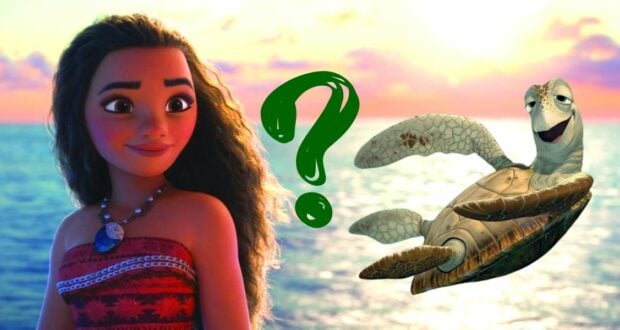 Disney film conspiracy theories are fun to follow along with, and while many of them may seem far-fetched, this one has a fairly concrete storyline that has us intrigued!

A new video is going viral on social media as it has reportedly proved the Disney conspiracy theory that Moana, from the popular Disney animated film Moana (2016), saved the life of the totally awesome turtle character, Crush, from Disney and Pixar’s Finding Nemo (2003) movie.

As you’ll see in the video below, the adorable Baby Moana is drawn to the ocean. As she stumbles towards the water, she sees a baby turtle trying to get into the water, but birds are attempting to harm it. Moana protects the turtle by shading it with a leaf. It swims freely into the water, thanks to Moana.

The theory is that this baby turtle is actually Finding Nemo’s Crush. Not only does Crush swim on his back as a baby, but at EPCOT’s Turtle Talk with Crush theme park experience, Crush himself seems to confirm the Disney conspiracy theory.

Check out the viral video below, as shared by @davidjustinn:

RELATED: Crush Hilariously Explains Why He Doesn’t Talk About Bruno From ‘Encanto’

2023-01-06
Jamie Sylvester
Previous: The Best Bar at Disney World You’ve Probably Never Noticed
Next: How Was Disney’s 2022? Well, Apparently They Were the “Worst of Woke”