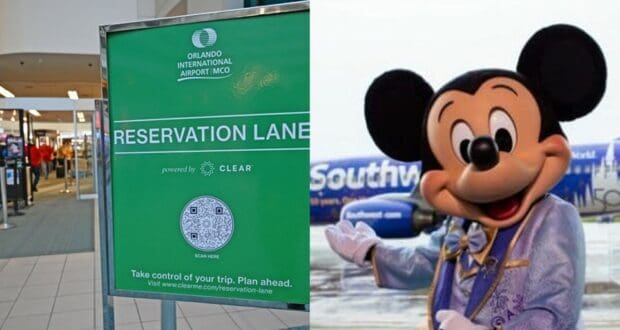 Tired of Paying To Skip Lines at Disney? Skip This Line for FREE at Orlando International Airport

Taking to the skies for your visit to “The World’s Most Magical Place”? Well, while we’ve been talking about paying to skip the lines at Walt Disney World Resort with the new Disney Genie+ and Lightning Lane options, Orlando International Airport in Central Florida is offering a complimentary way to save time and skip the line for security!

RELATED: Flying in for Disney World’s 50th? You’re in for a real treat at Orlando International Airport!

There has been a lot of news lately when it comes to Disney and taking to the skies! We recently shared the exciting news that Orlando Airport (MCO Airport) has welcomed Walt Disney World’s 50th Anniversary celebration decor throughout the airport for a stunning hello and goodbye to your Disney World anniversary vacation. On top of the 50th decor inside the airport, Southwest Airlines has taken the decor outside with a stunning 50th Anniversary-inspired airplane that showcases the beautiful EARidescent look. Mickey Mouse has even taken to the sky in Brazil with a new Mickey-themed plane! With so much excitement, why stop there? Now, Orlando International Airport is making their security process much easier by reducing the wait which, dare we say, is like a complimentary “Lightning Lane” line through security!

Orlando International Airport took to Twitter to announce, “Families & Single Riders, unite! Offering now: Reservation Lane powered by @Clear. You can reserve a time slot to go through security, just show up at that time, scan your reservation and go through an exclusive & shorter lane.” A second tweet continued with, “This pilot program is a free option for all travelers that would like to plan ahead by reserving their spot in line before their flight. Available at both security checkpoints at our airport. Simple, fast & easy to access, just follow the steps at: http://reserve.clearme.com.”

Keep in mind, when traveling through Orlando International Airport in 2022, Disney will no longer be offering complimentary airport transportation to and from any Walt Disney World Resort hotel. This complimentary Disney’s Magical Express Service will end at the end of 2021. Instead, Mears has said they will offer transportation for a fee. You can also plan to purchase a rental car or taxi to the Disney Resort hotels.

Anyone else thrilled about the possibility to skip the security line at Orlando International Airport? This just means more time in the Disney Store! We’re thrilled with this pilot program and highly recommend it for all those Disney travelers going to and from the Disney Resort to take full advantage of skipping the line for FREE!