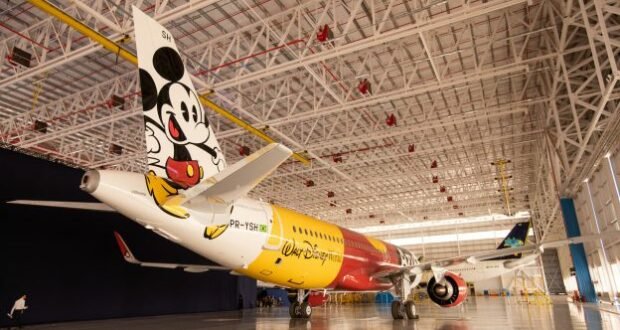 Who’s the leader of the SKIES that’s made for you and me? M-I-C-K-E-Y M-O-U-S-E! Don’t tell Donald Duck, but everyone’s favorite Disney Mouse is taking to the skies! You may remember we recently shared in honor of Walt Disney World Resort’s 50th Anniversary, Southwest Airlines now has a 50th Anniversary-inspired plane with a fantastic EARidescent look wowing Guests flying in and out of Orlando. Well, it looks like a fun Mickey-inspired plane is also taking to the skies over Brazil.

As reported by Disney Parks Blog, “Last week, Azul Linhas Aéreas presented an Airbus A320neo plane inspired by the mouse that started it all. The first of four red- and yellow-colored aircraft inspired by Mickey Mouse was unveiled during a magical event held at the airline’s hangar in Campinas, Sao Paulo. In true celebratory Disney fashion, Mickey Mouse surprised the audience, along with executives from Azul Linhas Aéreas and Disney, to officially welcome “Mickey Mouse Nas Nuvens,” which translates as “Mickey Mouse in the clouds,” to the airline’s fleet. Azul will debut three additional Disney character-inspired aircraft in the coming months, operating domestic routes through nearly 50 Brazilian airports.”

We love the name, “Mickey Mouse in the Clouds”! The launch of the first plane featuring Disney’s Mickey Mouse coincides with The World’s Most Magical Celebration, which began Oct. 1 and will continue for 18 months to celebrate the 50th anniversary of Walt Disney World Resort. Visiting Brazil in the near future? Be sure to look to the sky to see Mickey Mouse in flight! Check out the Mickey plane’s sweet smile in the photo below.

50th anniversary brazil celebration mickey mouse plane 2021-10-20
Jamie Sylvester
Previous: Ole! Dining in Epcot’s Mexico Pavilion
Next: Were it not for this mom and her newborn baby, ‘Toy Story’ might have ended after the first movie