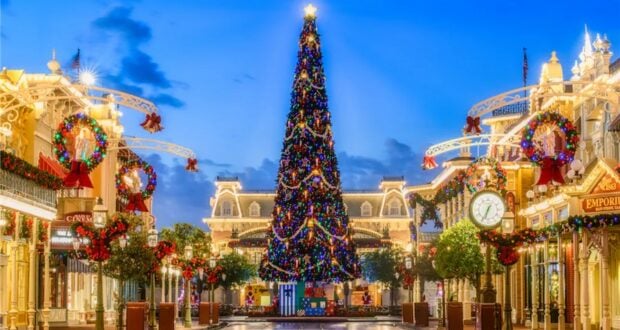 Halloween is just around the corner! Despite all things SPOOKtacular taking place currently at Walt Disney World Resort, Disney is also gearing up for the big holiday shift. Christmas will be here before we know it and Disney is getting ready to spread holiday cheer with incoming holiday plans recently unveiled for each Disney Parks and even Disney Springs. With so much jolly holiday fun on the way, Disney fans are making their plans to visit the Parks. Magic Kingdom Park is getting a new holiday special ticketed event called “Disney Very Merriest After Hours”. After TWO months of having tickets for sale, Disney has finally sold out on one party night.

RELATED: These 2021 EPCOT Holiday Kitchens Have Us Throwing Out The Diet!

The Walt Disney World website now shows November 9 of Disney Very Merriest After Hours is now sold out. Why did it take so long for just one night to sell out unlike holiday events in years past? The number one pullback we are hearing from Disney fans is the expensive ticket prices for Disney Very Merriest After Hours. Special event tickets range from $169 to $249 depending on the date. With no Magic Kingdom holiday party in 2020 due to COVID, we can compare ticket prices to 2019’s Mickey’s Very Merry Christmas Party where tickets started at $94. That’s a pretty large jump!

Another possible reason only one of Disney Very Merriest After Hours nights just sold out is that reviews for Disney After Hours Boo Bash (the Halloween Party that replaced Mickey’s Not-So-Scary Halloween Party) aren’t too great. Keep in mind, that Disney After Hours Boo Bash does not offer a special parade or fireworks. Disney has however announced they will offer Minnie’s Wonderful Christmastime Fireworks and Mickey’s Once Upon a Christmastime Parade for Disney Very Merriest After Hours. Thankful for the return of a holiday parade and fireworks? Disney fans have also learned that Disneyland Guests out in California will have a chance to see and experience holiday fireworks and a holiday parade without paying the extra to attend a special ticketed event.

RELATED: Holiday Fireworks & Parade Return to Disneyland – But At Disney World, You’ll Have To Pay

Disney has announced Disney Very Merriest After Hours as a chance to “Celebrate the holidays in the very merriest way at a new event featuring a themed parade, fireworks, Disney Character sightings, and more! Disney Very Merriest After Hours will take place from 9:00 p.m. to 1:00 a.m. on select nights, from November 8 through December 21, 2021. Ticket holders will be admitted to Magic Kingdom Park as early as 7:00 p.m. on the valid date of their ticket, giving them even more time to enjoy Park favorites before the event begins—including the new Disney Enchantment nighttime spectacular! These dated tickets do not require an additional day theme Park ticket or Disney Park Pass theme Park reservation.”

50th anniversary christmas disney very merriest after hours holiday Magic Kingdom special ticketed event 2021-10-20
Jamie Sylvester
Previous: Online comments by “Disney Fans” are among some of the most toxic, angry posts of all, according to some experts
Next: This 18,000 sq-ft mansion is 5 miles from Disney & the only one that got that “Star Wars” theme right