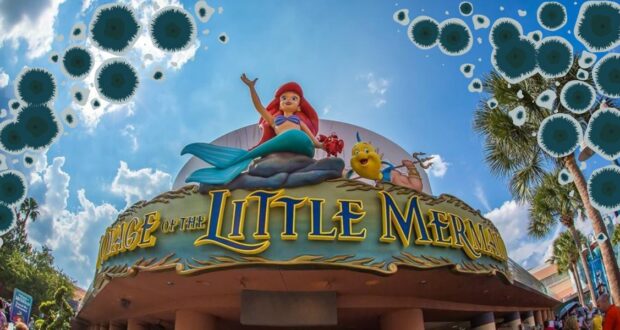 When Walt Disney World Resort began it’s phased reopening amid the COVID-19 pandemic in 2020, several close-contact attractions remained closed, including the iconic Voyage of the Little Mermaid stage show at Disney’s Hollywood Studios. But could a mold infestation be the issue?

The musical stage production located in the Disney Park’s Animation Courtyard was a 14-minute show that used live-action actors and actresses along with puppetry, special effects, and music to tell the story of Disney’s beloved The Little Mermaid (1989).

Among many of the show’s highlights in Voyage of the Little Mermaid, one of the most impressive parts was the 12-feet high and 10-feet wide Ursula puppet that would sing the villainous Sea Witch song, “Poor Unfortunate Soul.”

Sadly, two years after Disney’s reopening, the Little Mermaid attraction has remained closed. Not only has Disney kept the show’s doors closed, but they have removed the Voyage of the Little Mermaid landing page from its website, which surely isn’t a good sign.

With Disney’s Hollywood Studios, “Fantasmic!” finally back at the Park, fans were thrilled to see multiple characters during the nightly entertainment. Interestingly enough, die-hard Disney fans were quick to spot Ariel’s fin in the show as the former fin used by Ariel in Voyage of the Little Mermaid.

Comments to the video flood in as Disney fans talk about a potential mold infestation being the reason for the Little Mermaid show’s closure.

One comment notes, “The urban legend is that the theatre is covered in mold and in order to clean it they’d have to condemn the building and build it again which they’ll.” In response to that comment, a person adds, “Yes it is! My husband worked at studios and said the theatre is disgusting and moldy and that this show isn’t coming back anytime soon if at all.”

Another comment states, “Not speaking as a studios cm but as a ~private citizen~… that shows building is full of mold it was damp pre COVID.”

According to one comment, “The building flooded during the pandemic and the only way for them to get the show back is to rebuild the building due to lots of mold.”

Could these alleged reports of mold be true, or are these rumors nothing but talk? Regardless of the situation, a statement on the Voyage of the Little Mermaid’s condition or reopening status would be great to hear from Walt Disney World.

Furthermore, could a revamp of Voyage of the Little Mermaid with a “Halle Bailey-focused show” be in the works? The live-action Little Mermaid film starring Halle Bailey as Ariel is scheduled to be released May 26, 2023, with the following teaser trailer below:

As always, we will continue to keep Disney Dining readers updated as we learn more about the future of Voyage of the Little Mermaid at Disney’s Hollywood Studios.

2022-11-11
Jamie Sylvester
Previous: Fan-Favorite Experience is Back at Disney Springs!
Next: Most Underrated Disney’s Animal Kingdom Restaurant? You Decide!