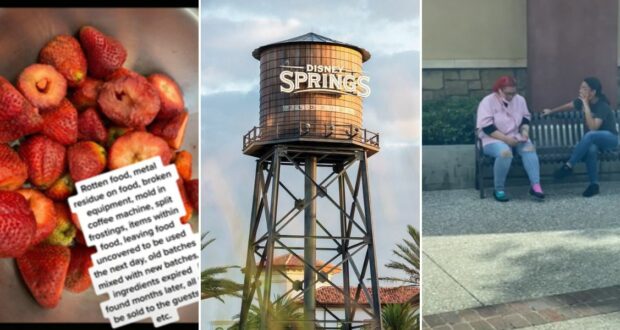 Walt Disney World Resort is known for its delicious bites and sips spread throughout the property. From Disney Parks to Resorts, and Disney Springs, there is no way for Guests to go hungry. But, a Disney Springs bakery is reportedly being exposed for serving rotten food and employee discrimination.

Several viral videos surfaced about a Disney Springs bakery providing Guests with old, stiff, and rotted food for its ingredients. Furthermore, the person posting the videos claims to be told they were “too autistic” to work at the location.

There are several recent videos posted to a new TikTok account called @exposingjobs. First, we see a video of “brick cupcakes” to be sold:

Another video below shows milk being left out and the creator noting, “They were expecting this to be used.”

The video below shows the Cast Member showing its “brick eclairs,” saying, “This is a daily thing”:

Moving away from the food discussion, a video is posted showing two people sitting on a bench at Disney Springs. The video states, “When a coworker’s bf records you as your manager tells you that you’re “too autistic” to work anywhere that’s not your home.” Here’s the video below:

And it doesn’t stop there. Another video shows multiple images of food and food storage saying, “Rotten food, metal residue on food, broke equipment, mold in coffee machine, split frostings, items within food, leaving food uncovered to be used the next day, old batches mixed with new batches, ingredients expired found months later all to be sold to the guests… etc.” Here’s the video below:

The creator goes on to report that specific allergen-free items are being put together with items that have that allergen in the video below:

Lastly, the video below shows an extremely dirty floor that the creator says has “been sitting there for years.”

We will be sure to keep Disney Dining readers updated as we learn more about these alleged reports of the exposed Disney Springs bakery.

2022-10-13
Jamie Sylvester
Previous: Could Disney Soon Be Represented in Florida State Legislature? Some Think So.
Next: Johnny Depp is Unrecognizable Now