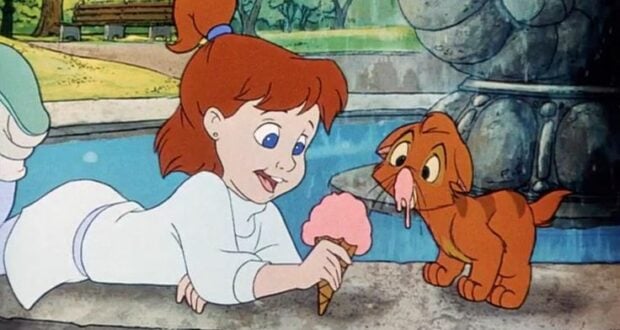 We Disney foodies always have good eats on our mind. Many of us spend time between Walt Disney World vacations recreating food from the parks in our own kitchen trying a new Disney recipe and dreaming about what we will eat on our next vacay.

When we are not travel planning or in the kitchen, we often hunker down with a Disney movie. No doubt about it, there are some iconic food moments in Disney film history. Do you remember these movie moments?

How could we start anywhere else? The Lady And The Tramp spaghetti scene is about as iconic as it gets. The twinkling stars, cozy alley, romantic table decor, and mood music are the perfect accompaniments for Tony’s Spaghetti and Meatball Special.

A spaghetti noodle kiss, the sweet sharing of the last meatball, and the shy way the pups interact make for one of the most memorable Disney film scenes ever. If you want to recreate this movie magic, book an advanced dining reservation at Tony’s Town Square in Magic Kingdom!

The 1995 film, A Goofy Movie, may not come to mind when I mention iconic Disney film food moments. But wait, have you forgotten the “leaning tower of cheeza”?! Remember when the carefree and laid-back student Robert is happily gorging on spray cheese outside the school principal’s office beside a very worried Max?

“Chedda Wizzy!!!” as Robert calls it, seems to be a passion as he always has a can of cheese on his person. Over twenty years later, I can honestly say, I still can’t see a can of spray cheese without thinking of this Disney film food scene.

The Dining Room Proudly Presents Your Dinner – Beauty & The Beast

Obviously, if you can sing a song in your sleep, it ranks pretty high as an important Disney moment. Add in the fact that many Disney nerds can list off the foods Belle is presented with at Beast’s table, and I’d say you have a pretty iconic Disney food moment.

It’s a shame that Belle doesn’t get to taste the spread in front of her (save for a quick taste of the Grey Stuff). Still, this scene in Beauty & The Beast is one of the most famous Disney food moments, inspiring merchandise, copycat recipes, and even a restaurant in Magic Kingdom!

One of the stick-with-you-scenes from the 1988 film Oliver & Company is the Central Park ice cream scene. The film frame of sweet Jenny and little Oliver the kitten indulging in a pink ice cream cone during a day in the park is precious.

The pair take a paddleboat ride, make laps around the park in a beautiful horse-drawn carriage and skip by park goers as an adorable pair, but the ice cream scene is most memorable. Oliver’s little nose covered in pink ice cream is the scene that comes to mind when I think of this Disney film.

One Jump Ahead, Bread Theft- Aladdin

Sure, the food in question is just a loaf of bread in the One Jump Ahead scene in Disney’s Aladdin. Still, the theft of this simple food staple sets off quite a chain of events that sets the film in motion. We find Aladdin swinging, jumping, and running through the Agrabah Bazaar pursued by guards as the colorful spices, fresh fruit and vegetables, shiny cookware, and lush fabrics for sale flash across the screen during the song.

Aladdin of course also meets Princess Jasmine in this same bazaar. If you are looking for a taste of this movie on your next Disney vacation, we suggest a visit to EPCOT’s Spice Road Table in World Showcase’s Moroccan pavilion.

Does it get any better than a (not so) evil henchman that can also cook? Kronk’s Spinach Puffs are one of the memorable moments of The Emperor’s New Groove. So much so — that I never see a frozen spinach puff at the supermarket without thinking of that funny movie scene.

You do not think of the Disney Pixar film Brave, without visualizing the stolen biscuits that are swiped by Merida’s sneaky triplet brothers. This trio of sneaky red heads steal an enormous mound of buttery shortbread empire biscuits from the family table and are seen bouncing around the castle with biscuits in hand.

Harris, Hubert, and Hamish are little bundles of energy, and seeing them always brings this Disney cookie to mind. While there are no empire biscuits for sale at Walt Disney World, there are some delicious copycat recipes online for these buttery crumbly biscuits.

The impossible to impress Parisian food critic, Anton Ego, is known to write blisteringly critical reviews of Parisian restaurant cuisine. This makes it that much sweeter when the entrée service scene unfolds near the end of the Disney Pixar film, Ratatouille. When tasting the first forkful of this “peasant dish” that Colette had qualms about serving to such an important customer, Ego is transported back to his childhood.

The daydream sequence that unfolds, shows a young Ego taking comfort in this simple dish prepared by his mother in a humble French cottage. This Disney food moment leads to a huge realization for Ego that “a great cook can come from anywhere”.

Related: What You Need To Know About Remy’s Ratatouille Adventure

2022-02-04
Katie Chapman
Previous: Twelve-year-old girl says she “didn’t feel beautiful” until she saw Disney’s “Encanto”
Next: Disneyland Just Introduced 4 New Churros and a New Pretzel — But Some For Only a Limited Time!