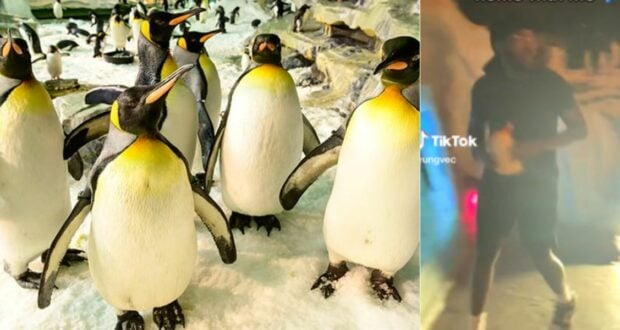 Guest Jumps Enclosure to Fake Stealing a Penguin at SeaWorld

When visiting Central Florida, tourists and residents have a plethora of theme park options to choose from. While we may spend much of our time at Walt Disney World Resort, Universal Orlando Resort and SeaWorld Orlando are easily the top neighboring competitors.

Disney’s EPCOT may have drunken Guests. Universal Orlando may have fights. But, well, SeaWorld seems to be the hot spot for pranks.

On the heels of the news of SeaWorld Orlando’s recent dolphin attack viral video, which resulted in a statement from PETA, followed by SeaWorld releasing a statement… now the Park is going viral for a Guest prank.

A recent incident occurred with a Guest at SeaWorld that has led to a viral video that currently has over 5 million views.

As you can see in the video, the Guest jumped the penguin wall, pretending to steal a penguin. It is a stuffed penguin that must have been placed there before the video. You can also see in the video how the real penguins hurry away from the man jumping the wall.

This isn’t the first time we’ve seen a SeaWorld Orlando prank. This past summer, a Guest brought a fishing pole to the theme park and pretended to be fishing before a Team Member stopped the Guest for the safety of the Guests and animals.

Check out the fishing SeaWorld prank in the tweet from @SeaworldH below:

Much like Disney’s Animal Kingdom Park at Walt Disney World, the theme park animals may be in captivity, but this doesn’t mean they are used to human interaction… and definitely not acquainted with someone jumping into their enclosure.

SeaWorld Orlando features the “Antarctica: Empire of the Penguin,” which is described by SeaWorld as:

“Explore the habitat of Antarctica: Empire of the Penguin®, where you can see five species of penguins. Get a glimpse of this penguin colony in cool extremes: bringing you above and below their icy world. See penguins waddle around in snowy environments or gliding gracefully under water in this expansive habitat.”

Next time this Guest visits SeaWorld (if not already banned), we’d recommend staying on the correct side of the animal enclosures.