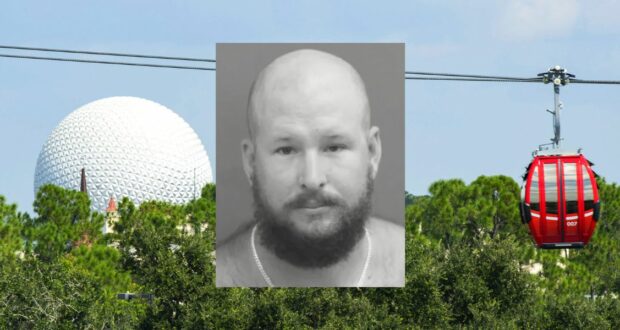 While we like to think of Walt Disney World Resort as a magical place filled with nothing but pixie dust and sunshine, it seems like it’s inevitable that at least one Guest decides to make poor choices on a Disney vacation… and that’s exactly what happened with this EPCOT theme park Guest.

We’ve seen viral videos of Guests attempting to sneak children into the Disney Parks. There have been Guests that trespassed into restricted areas. We’ve even seen recently a Guest exiting a ride vehicle to sit with an animatronic.

A report has been released sharing details on an incident that unfolded at EPCOT during the ever-so-popular EPCOT International Food and Wine Festival.

While we adore this EPCOT Festival, there is plenty of Guests sipping on beverages around the World Showcase and beyond… and typically, they are adult beverages.

A 30-year-old Guest by the name of Chase Holderby from Merritt Island, Florida, seemingly surpassed his alcohol intake limit and made some poor decisions as a result.

According to Disney security and Orange County deputy, Holderby was initially spotted in the American Adventure Pavilion as witnesses watched the man chug down two beers in 30 seconds.

The arrest report quotes the deputy stating, “We observed the subject shaking everyone’s hand in line, high-fiving people, and was stumbling while in the line.”

What seemed like a friendly thing to do was met a few minutes later with Holderby having a verbal argument with members in his Disney vacation party near the Japan Pavilion.

As Holderby progressed around the World Showcase and reached the Morocco Pavilion, the Disney Park security decided it was time to ask the drunken Guest to leave.

The closest Disney Park exit is the International Gateway between the France Pavilion and the United Kingdom Pavilion. Here Guests can take a ride on the complimentary Disney transportation known as the Skyliner to access other surrounding areas on Walt Disney World property.

The report notes, “We followed Holderby to the International Gateway exit while he took his shirt off and continued asking what he had done wrong.”

Holderby then became a safety hazard with the report stating, “While attempting to get him onto the physical gondola car, he wouldn’t initially get in and was dangerously close to falling into the area beneath where the attraction operates.”

With the Guest at a fall risk, Cast Members decided to shut down the entire Skyliner transportation system for Holderby’s safety which was noted as, “inconveniencing and delaying all other riders.”

At this point, the deputy made the decision to arrest Holderby on charges of trespassing and disorderly intoxication.

As always, we will be sure to share more about this story if any further developments are released. In the meantime, the lesson here is to know your limit when enjoying beverages at EPCOT or any theme park for that matter!