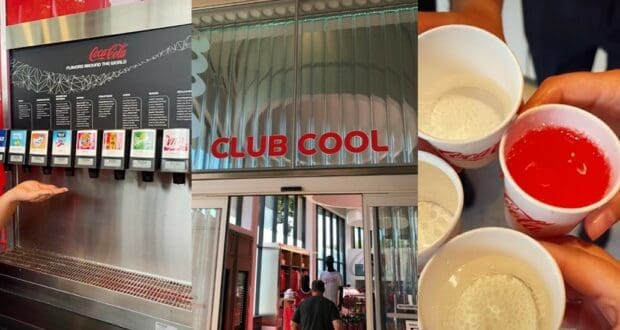 EPCOT’s Club Cool Is Back! Here’s a Look Inside

Today is a big day over at EPCOT! Disney fans are flocking to the Theme Park to get a first look at the new flagship merchandise store called the Creations Shop. Plus, what goes better with a little shopping than a sip on some Coca-Cola? Both the new Creations Shop and the revitalized Club Cool are now open in EPCOT’s new World Celebration!

If you never experience the previous EPCOT Club Cool, it was a Walt Disney World Resort fan favorite as Disney offered free samples of Coca-Cola creations from different countries. Each flavor has its own unique taste… and of course, the disgusting but fan favorite “Beverly” flavor from Italy is one you just have to try. The Disney Park experience is now BACK and better than ever! Disney Parks took to TikTok to share Cast Members thoughts on which of the tasty drinks is their favorites and to provide a sneak peek inside! Check out the video below:

@AshleyLCarter1 took to Twitter to share the following photos and a quick video of the revitalized Club Cool at EPCOT:

You may have spotted that just like you’ll find at the Coca Cola Store at Disney Springs, there is some Coca Cola merchandise at the new Club Cool. Ready to drink up? Coke soda flavors from the photo above (left to right) include:

Are you up for the Beverly challenge? The odd-tasting soft drink is BACK as shown in the video below:

Another photo of inside the new Club Cool comes from @parkhopperzach via Twitter as he shares: “Back and better than ever”:

Not only is EPCOT dishing out the new shopping experience at the Creations Shop and fun sips at Club Cool, but they are also preparing to open the new Space 220 Restaurant next week! Plus, EPCOT is going to be a great place to be for Walt Disney World’s 50th Anniversary with a new nighttime spectacular, “Harmonious” on the way October 1, as well as Remy’s Ratatouille Adventure attraction opening October 1. Be sure to make plans to stop on by the new Club Cool for a sip or two of your favorite Coca-Cola flavors from around the globe! Happy sipping, Disney fans!