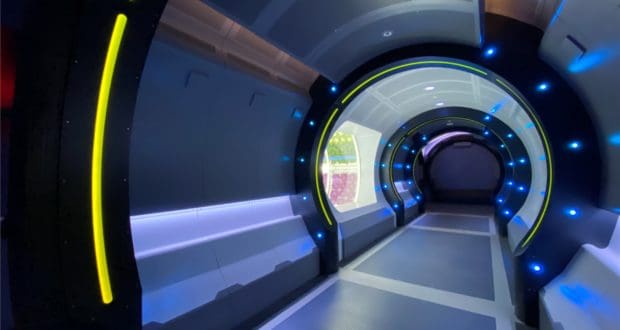 JUST IN! We previously shared the news that Space 220 will be opening in EPCOT this month. What Disney had yet to reveal was the official opening date… UNTIL NOW!

We’ve all been eagerly awaiting the opening of an out-of-this-world restaurant coming to Walt Disney World Resort that was initially scheduled to arrive at EPCOT in 2020. With COVID causing the troubles it did, we’ve been hearing rumors buzzing that Space 220 would open sometime this fall. We have also seen Patina Group hiring for the restaurant. Now, Disney has officially revealed they are ready for launch!

As shared via Disney Parks Blog Instagram: “Did you hear? Space 220 Restaurant at EPCOT will open September 20th, just in time for the 50th Anniversary of @WaltDisneyWorld Resort! #DisneyWorld50”

Disney’s description of the new restaurant goes on to say, “A Stellar Adventure: Embark on the ultimate culinary exploration from this new expansion of the Mission: SPACE pavilion. Step inside Space 220—a celestial panorama of a space station—for a delicious meal! As you dine, peer out and enjoy amazing daytime and nighttime views of Earth from 220 miles up.” “Going Up and Dining Out: To begin your journey, board a special space elevator that will ascend to the stars! Along the way, viewports will give you an aerial view of EPCOT as you travel high above the planet. Upon your arrival, you will dine from a menu featuring modern American cuisine, out-of-this-world cocktails, and a wide selection of craft beer.”

Anyone else especially excited to try the stellar dishes and atmospheric cocktails? Take a sneak peek inside of the new restaurant with Disney Imagineer Zach Riddley. Check out the video below previously revealed via Disney Parks TikTok: