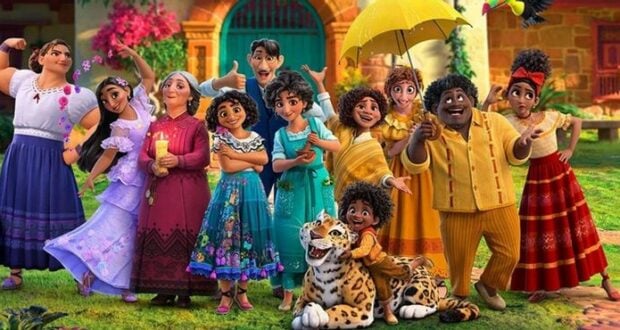 Disney’s ‘Encanto’ Is Headed BACK to Theaters!

Disney’s newest animated film, Encanto, has been an instant success since it landed at the box office on November 24, 2021, for a Thanksgiving holiday to remember. Disney fans flooded to the theaters and haven’t stopped talking about the movie (or singing its catchy songs) since. And now, get this… Encanto is headed BACK to theaters!

RELATED: “We Don’t Talk About Bruno” Remains Billboard #1 For Third Week In a Row

The extremely popular Encanto has set a ridiculous amount of records, inspired memorable sweet stories thanks to its diverse cast of characters, has Disney fans wanting an Encanto-themed attraction in the Parks, and even encouraged one Utah Dad to create his own stunning Encanto projection show.

It’s no secret that while some Disney fans eye roll over the film’s success, the numbers show the majority thinks Disney Animation’s Encanto is rather impressive. Now that it has been nominated for 3 Academy Awards including Best Animated Feature, the Family Madrigal is headed back to the big screen with a return to theaters!

RELATED: Lin Manuel Miranda Says One of His Family Members Is Done With Bruno’s Song From “Encanto”

Disney’s Encanto took to Twitter to share the big news that Encanto will be in select theaters beginning this Friday, February 18. Is your local theater participating in this exciting Encanto return? You can check to see participating theaters here along with ticket sales now available at select theaters.

RELATED: We Don’t Talk About Bruno, but Let’s Talk About These “Encanto”-Inspired Cakes!

This is your big chance. If you missed the opportunity to watch Encanto in theaters, or if you just want to watch it one more time on the big screen, it sounds like you have a date this weekend!

Plus, yes, Disney+ will continue to stream Encanto free of charge for its subscribers, but we all know it’s not the same as the movie theater experience.

2022-02-15
Jamie Sylvester
Previous: “We Don’t Talk About Bruno” Remains Billboard #1 For Third Week In a Row
Next: Lizzo To Make Disney Debut in ‘The Proud Family: Louder and Prouder’