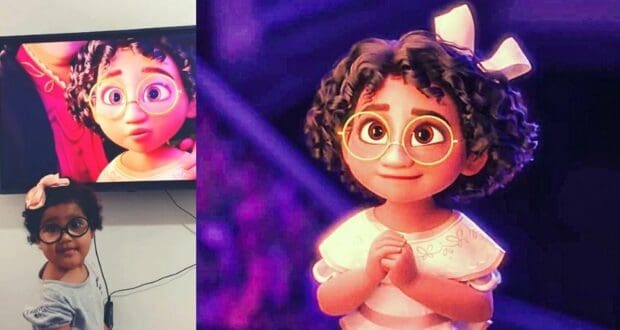 “It’s Me, Mommy!” Little Girl Believes She Is Mirabel From ‘Encanto’

Excuse us while we fill your screen with some cuteness today! Disney’s Encanto is what all the buzz is about recently! Not only do we all have “We Don’t Talk About Bruno” on repeat in our minds, but we’re loving every minute of the colorful joy of diversity Encanto’s animated Madrigal Family is spreading. Now, a little girl is sure she has seen herself in the main animated character, Mirabel Madrigal.

It wasn’t too long ago that we were sharing the adorable news of a sweet boy named Kenzo who was sure he was seeing himself on TV while watching Disney’s Encanto. When the young animated character, Antonio, popped up, he was thrilled to see himself in the movie. Now, we see the same sweetness happening in a young girl as she relates to Mirabel’s appearance.

The mother of a sweet little girl named Manu took to an Instagram page for her daughter (@manubaby03) to share a video of her child watching Disney’s Encanto for the first time. When young Mirabel pops up on the screen, this adorable little girl believes she is seeing herself!

The round glasses, big bright eyes, and curly hair fit Mirabel’s character appearance perfectly! Manu immediately said, “It’s me, Mommy!” in her native Portuguese. Manu’s mom captured the moment in the video which according to PopSugar mom responds with “It’s you? Look at Mommy, let me see if it’s you.” Manu then turned around to showcase her adorable resemblance.

When Manu later saw the adult version of Mirabel, she said, “I grew up, Mommy!” Now, the mother adds she wants to watch the Encanto film every day. The post has received over 17,000 likes and counting. Check out the video below:

Disney’s Encanto continues to take its levels of success to new heights with a recent Golden Globe for Best Animated Feature along with topping Billboard Charts for the music created by Lin-Manuel Miranda. If you haven’t had a chance to see the new Disney film yet, Encanto is currently streaming on Disney+.